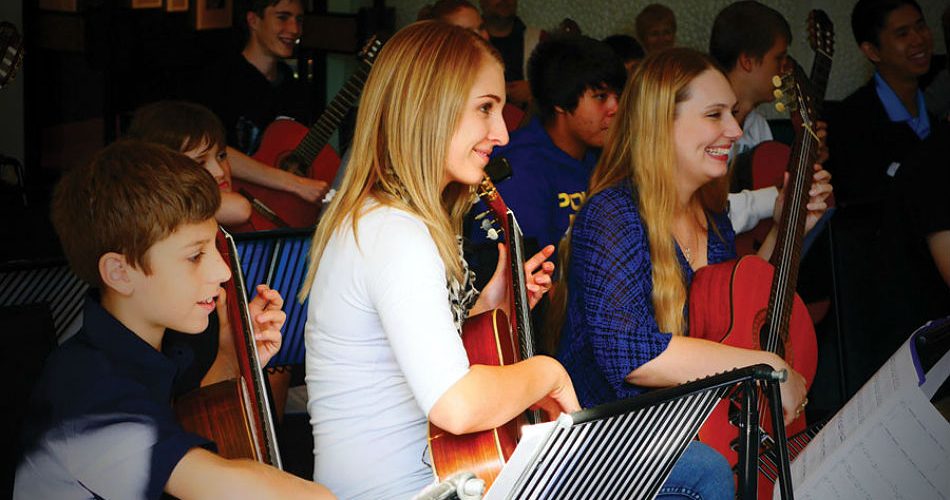 Slava Grigoryan is rightly heralded as one of Australia’s finest proponents of classical guitar with a career spanning over 20 years and accolades galore. Young Australian Of The Year for the Arts in 2000, major prize-winner at the Tokyo International Classical Guitar Competition, six solo albums and another five with his brother Leonard Grigoryan, Slava has performed at numerous international festivals and with some of the world’s leading orchestras.

Once again taking the reins as Artistic Director for Adelaide Guitar Festival, we speak with Slava Grigoryan about his vision and passion for the festival, and ask what draws him to continue in what must be a very intense role.

“It is intense, but it’s also an extraordinary privilege. It’s such a rare event in the guitar world calendar. To be involved from a tutorial perspective is an absolute honour and a pleasure, and I’ll keep doing it for as long as I possibly can.”

The word ‘International’ has been removed from the festival’s title. Does this indicate less focus on international involvement?

“I think it’s just that it’s really obvious from the breadth of international artists that it is an international festival and, to be honest, it was one extra word in the title that we didn’t need. In the initial stages the festival possibly needed something like that to outline its desires but now it’s irrelevant because the volume of international interest is pretty huge.”

The festival program includes the introduction of a summer school this year, featuring world renowned local tutors, as well as Massimo Scattolin and Andrea Vettoretti from Italy.

“This is the first time we’re doing something like this. With every edition of the festival it’s continued to grow thematically; the summer school was an extension of that process. It was directly linked to the success we had in 2014 with the guitar festival orchestra, where young players from all over Adelaide got together under the directorship of Dr Paul Svoboda, and on the final night he and 80 students played on the Festival Theatre stage. It was extraordinary, and one of the highlights of the festival. The summer school is definitely going to build on that and we’re hoping that in the next five or six years we’re going to be blown away by what local young players are doing even more.”

Is the summer school tailored toward younger players?

“Not specifically but that’s where it has the most appeal. The summer school is open to all ages. There’s something in there for everyone at all different levels and the tutors are focussing on very particular needs of all the students.”

The only minimum requirement is an AMEB (Australian Music Examination Board) Level 3 and that opens it up.

“It does, and we actually encourage people to get in contact with us directly so that we can talk some of these things through because it’s a very loose level indicator.”

Is it specifically tailored to nylon string players?

“It is open but the ensemble requires that nylon be played, purely because of the music, and the composers write for classical or nylon string guitar. A lot of the techniques that they employ require players to have a guitar like that.”

We discusses the breath and accessibility for all tastes within the program of this year’s Adelaide Guitar Festival.

“It’s absolutely there for everyone. Every edition of the festival has had a very different colour because of the headliners and line-up of artists.”

Your upbringing and the diverse tapestry of influences and cultural background must’ve had a profound effect on your artistic expression. You come from a very musical family, and had formal and perhaps not so formal lessons since you were about seven years of age?

“Yes, mostly informal in the sense that my main teacher was my father. Mum was also a wonderful musician, and was very much involved. Mum and dad taught us in a very classical way but they had a very eclectic musical background themselves. Dad was a violinist, who for many years was also a professional jazz-rock drummer. We were force fed Bach, Weather Report, Miles Davis and Hendrix all at the same time. They really encouraged me, then later my brother, to play in bands and to improvise and play electric instruments too. It was a wonderful mixture of influences that turned us into who we are today, musically.”

It must have been a very nurturing teaching environment because watching you and your brother Leonard play, it’s obvious that you love doing what you’re doing; that absolute passion comes through.

“Again, thanks to our folks. They had a very formal, Soviet upbringing when it came to learning music classically, and I think as a result they knew what they didn’t want to do [laughs] with their own students. It was all about the joy. One thing that I love hearing from them (they still teach full time) is they don’t use the word ‘practice’ with their students at all, it’s all about playing. It changes the way students feel about what they are doing and how to get better.”

Another family connection that is quite special is the Tawadros brothers. They bring their own heritage but there is something uniquely Australian about what they do.

“I think you’ve nailed it on the head. I think what they do is uniquely Australian I don’t think they would have evolved anywhere else. It would have been wonderful but very different. The cultural blank canvas that we have here is creative and inspiring. The diversity of culture makes us so much richer in this country”

What is next for you in regards to recording, touring, and collaborating?

“I’m just as busy as I always have been in terms of touring and recording, mostly with Leonard and next year we’re getting together to play with our good mates the Tawadros brothers for the first time in six or seven years. We’re recording another album with an Argentinian baritone singer called José Carbó, and I’ve got a tour with the Australian Chamber Orchestra next year, the first in 16 years. I also work in a duo with my partner, Sharon Draper, a wonderful cellist, and we’ve got a bunch of shows happening this year. So, lots of wonderful and exciting projects on the go.

“I look forward to the festival continuing to expand and open its arms to more and more players, ensembles and audiences.”