SmallWaR: A Gripping Exploration Of The Tragedy Of War – Adelaide Festival Interview 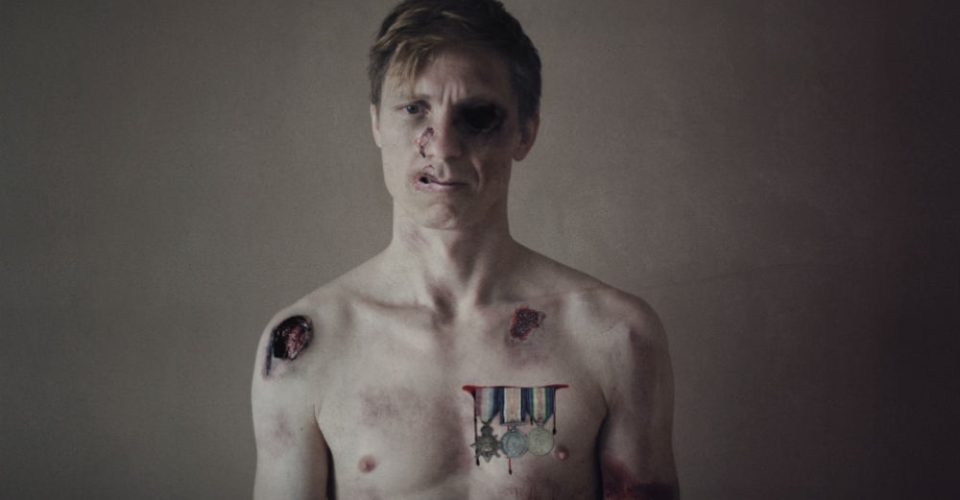 SmallWaR, a gripping exploration of the tragedy of warfare, and of human-kind’s propensity towards killing, is coming to the Adelaide Festival 2015. This one-man show creates powerful imagery using video projections and audio loops to augment the monologue, and the English-language version of the play met with critical approval when performed in Edinburgh and Plymouth.

We speak with writer and sole performer Valentijn Dhaenens, and asks how audiences have reacted to the performance.

“I’ve been very happy with the reaction,” Valentijn begins. “It’s actually a follow-up piece to a play I did in Adelaide [2014] called BigMoutH. That one was like a history of the world through famous speeches and, often, how the result of those speeches is war. I wanted to make a companion piece and I wanted this play to be very different from the first one.

“It’s very hard to do something on stage with war – you can’t start shooting at imaginary people in the audience, you don’t have the explosions like in the movies; I think it’s very difficult,” he continues. “I was looking to find something very personal to do. I wanted to stress the trauma of war; being stuck in the mud for three weeks, just waiting to do something, agonised by pain and fear. This piece is very introverted.

“I was a bit scared in the beginning. The play was very well-received in Belgium but I wasn’t sure about the English (speaking) audiences, who can be slightly different in their perceptions, but it worked very well. I was very happy with the reaction in Edinburgh.”

Where have you performed SmallWaR so far? 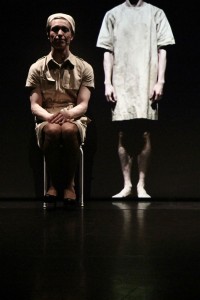 “I’ve performed the Dutch version (DeKleineOorloG) in Belgium, my home country, and in Holland,” Valentijn says. “Then I made the English version, which is slightly different, and is called SmallWaR. We’ve only been in Edinburgh and Plymouth so far.”

Is there something about the so-called “Great War” that captures the imagination more so than subsequent wars? Why were you attracted to use this conflict as the setting for SmallWaR?

“The First World War was fought where I grew up,” Valentijn explains. “When I was young, there were kids in my class whose farming parents were still finding shells in their fields. Every two months or so, a bomb would explode while they were ploughing the fields. I was also very attracted to the cemeteries where all the soldiers were laid to rest; it was always very close to me.

“The First World War has, for me, always been the symbol of war in general,” he adds. “It was the first industrialised war, the first that used chemical weapons, and where aerial bombings took place. Tanks were invented, plastic surgery was invented. And it also took so long. They thought it would end by Christmas but it took so many years. And nothing really changed. It was a war totally without reason, and so many people were killed.

“I was very attracted to the stories of the nurses because that’s something you wouldn’t have these days. America wasn’t involved in The War until the very end, but a lot of young nurses came over from America to help in the French hospitals. If you read their diaries you can see them change, in a period of a few weeks, from being very idealistic to being very cynical. That attracted me very much; to see how one naïve, beautiful person – who thinks of herself as kind of an angel who is going to help the soldiers – can turn into a terrible, cynical old woman in just a matter of weeks. And I think this human side of the conflict is the thing that affected me the most. That made it possible for me to make this show.”

Having read diary extracts, letters and other writings from soldiers, nurses and civilians, there was a sense of world-weariness and cynicism creeping in. It’s quite striking, yet quite understandable.

“I think it was the last war where, for anyone who read the diaries of the soldiers, they all felt like fighting,” Valentijn suggests. “That is amazing! I can’t imagine today, sixteen and eighteen year olds being enthusiastic about going to fight. It was such a different time; they were so willing. Maybe they thought it would only last three weeks but, still, you are putting your life in danger. For them, when they left for war, it was like a big adventure.”

Were you always going to do two stories? Or did the idea of creating SmallWaR come subsequently?

“It was while performing BigMoutH that the idea for SmallWaR came to me. I really wanted to show the other side of all those speeches,” he says. “Even while making them, as an actor, you can feel the audience getting enthusiastic about good oratory; it just works. And people can still be seduced by it. Even when I used Goebbels’ speech from the Second World War, every night, I could feel the audience just being tempted to follow this man. And it’s just me, saying these words.

“I felt the urge to show people where these speeches can lead and [I wanted] to make something that was about the victims of those speech-makers. All those speakers were all aiming to be something bigger than just an individual; desperate to have power over the masses and to have power over history – wanting to be God, I guess.” 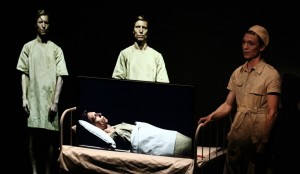 Your research, although largely based around the stories and diaries of the First World War, also led you to events that happened much later, in Vietnam and Palestine, for example. How have you worked more modern aspects of warfare into the play?

“I wasn’t interested in making a piece about the First World War,” Valentijn points out. “Whenever I make something, I want it to be about being here and now, at this point in history. The War was a starting point. It’s kind of abstract; it’s set in a field hospital, but I wanted to have material from many other wars to help show whether anything has changed at all. I wanted to put it in a broader perspective.

“It was very important to have letters from soldiers in Afghanistan next to [letters from] soldiers of The War, and even earlier. I think the earliest thing I used is a speech from Attila the Hun, and the most recent is from 2007. I wanted to talk about the victims, the soldiers, the nurses, and to stress the point that a letter written by a soldier to his unborn child – that could be the same letter today as it was in the 16th Century.”

What is the one message that audiences will take away from SmallWaR? That it is the ordinary person that pays the ultimate price in war?

“Yes, that’s the big point,” he agrees. The other big thing is where this urge to kill each other comes from. Most soldiers do it voluntarily. Starting from the Vietnam War they looked more into the psychology of the soldier, and some nasty things came out. The first kill is very hard but once a person has killed once, and they have conquered someone, something happens to the soldiers and most of them will start looking for a second kill to see if they can get away with it again.

“On one level, we look at the politicians who send soldiers or the world into war, time and time again,” Valentijn concludes. “On the other level you see that it’s also inside human beings to kill each other.”