SEVENTEENTH Season??? How the Hell did that happen???

You might assume that any TV show that had been going for that many years would have long ago lost its bite, punch and point (and we are looking at you, Simpsons), but Trey Parker and Matt Stone’s still-scathing brainchild doesn’t offer one dud in this 10-strong episode collection. 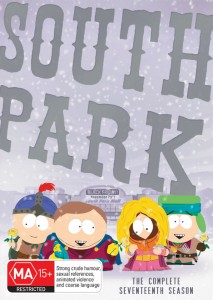 Particular highlights: World War Zimmerman, that strikingly links last year’s blockbuster World War Z with America’s dangerous ‘stand-your-ground’ law; Goth Kids 3: Dawn Of The Posers, in which Stan, Kyle, Cartman and Kenny don’t appear and instead we follow those four Goth pre-teens as they uncover a, like, totally lame plot to turn them and the ‘Vampire’ children into (gasp!) emos; Taming Strange, where Kyle’s adopted Canadian brother Ike suddenly hits puberty and winds up sexually obsessed with Foofa, a giant-pig-costume performer that moves from a kiddie act to Miley Cyrus antics; and the epic trilogy Black Friday/A Song Of Ass And Fire/Titties And Dragons, a brilliant saga that combines Game Of Thrones, the xBox versus PlayStation debate, murderous Christmas shopping, cool mock-Manga anime, media sensationalism, a bit of Invasion Of The Body Snatchers, cannibalism, a killer Bill Gates, Kenny’s rebirth as the inexplicable Japanimation character ‘Princess Kenny’ and George R.R. Martin’s fascination with ‘wieners’.

(Special Features: ‘Mini Commentaries’ by Parker and Stone and some deleted scenes)