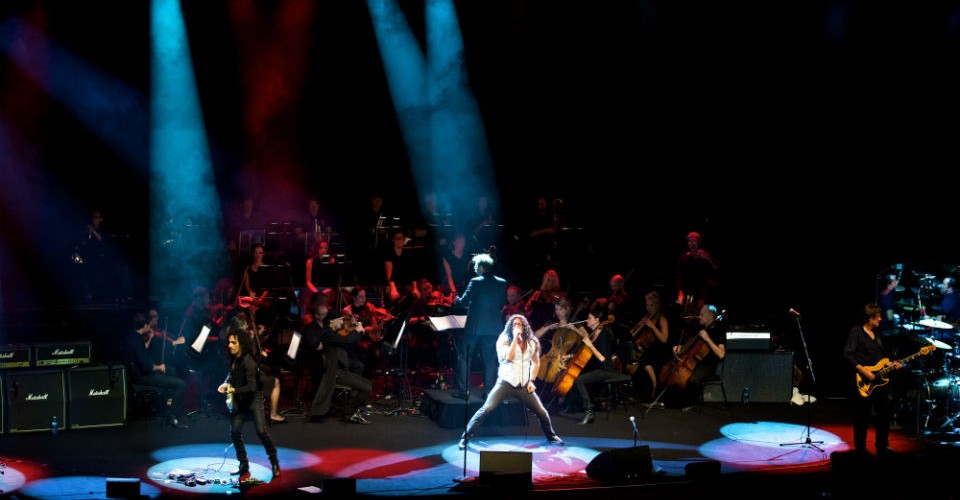 To keep a Led Zeppelin cover band, not only working for 30 years, but on an ever-increasing rise in popularity, world renown and class, is an extraordinary feat in anyone’s world, and deserves serious recognition from the Australian music industry and the band’s hometown, Adelaide.

Vince Contarino, classically trained lead vocalist and founding member of the Zep Boys, doesn’t need much encouragement to talk. He is ebullient, passionate, warm and authentic, and has many interesting stories from his rich and remarkable life. An engaging and generous man, with huge respect for his audience and the people who have contributed to his success, he is inspired, invigorated and genuinely happy. It shines out of him, like a man in love.

Nikki Fort sits down for a coffee with Vince Contarino and asks about when he first falls in love with Led Zeppelin.

“I remember the impact of Led Zeppelin from age eleven or twelve. I would have heard them before that but I didn’t know their first album (Led Zeppelin I) existed until way later. Whole Lotta Love was on Led Zeppelin II. That came out in ’69 so I was nine then. I can remember hearing them in 1971/’72 and wondering what is that? and it was Black Dog.

“My older brother was playing their records. Led Zeppelin III, I worshipped it…. worshipped it!” he enthused. “It was the one the critics canned. They said, ‘This band lacks direction. It’s the end of them,’ because of the variety of styles in the songs. But that’s what appealed to me most; I like variety, especially from the same dudes.

“As a kid, I didn’t know I was going to be a musician or an actor. I just knew I had to entertain,” Vince recalls. “Coming from an Italian background, passionate and volatile… the best leveller was always humour – along with voice or music, or both. But it had to be topical otherwise you were disregarded. When it works, you know that it’s your chosen path. Of course, you have to improve your skills, learn how to make it work, keep it consistent and, as an artist, you give it all. You have to learn how to protect yourself in that or you won’t survive. So, that’s a life’s work.”

I, personally, find it insulting and rude when performers, big name artists like Bob Dylan, don’t acknowledge their audience on stage. What I see and feel in you is your huge love and respect for the audience.

“Yeah, absolutely,” Vince agrees. “You might be pissed off by the world, but the people who are there in front of you have put food on your table and paid your mortgage, and they deserve everything you’ve got.”

Artists like Joe Cocker, for example do that; give it all, no matter what.

“Artists like Joe Cocker and Jimmy Page, to me, do the same magical thing. When you see them performing, they will channel the music of every person on stage through themselves. Joe has got every instrument going through him. People think he’s just weird with his movements, but he’s got every crotchet going through his body.

“Jimmy Page is the same thing. They channel it into the audience and back into the musicians. It’s like the original Shaman around the campfire channelling energy to the people, who don’t necessarily know what’s going on but they are getting it and loving it. It’s in a lot of us as performers and in there are the formulas to the Universe and how we really can harmonise in our world, not only with song, but with personality and similar values.”

Vince talks about worship of money and intellect taking premise in our society over the heart and soul of music, and that some of these heavy weight intellectuals that are tone deaf and have no palate… no taste.

“They leave me cold,” he says. “The megalomania and the ego and greed I’ve seen in some of the people who have tried to take us over; it’s like seeing something you love being raped and discarded.

“I saw a lot of money on wings as a young man. As an artist I didn’t give a fuck about the money; I was still working my craft. It wasn’t until I met older musicians, people I respected who’d sit me down and say, ‘Let’s have a look at what you’re doing, Vince.’ When they’re not interested in your money, and they talk to you as a mentor, you respect them and you listen. I started to look at the money as a pie that I’d baked, in my kitchen, yet somehow out of the whole pie, I was always left with only the foil plate and a few crumbs.

“Once things started to be really successful, the ‘big boys’ would come in and think they’ve got it all over you. I would say, ‘Boys, I’m not gonna match it with you, because I know I’m going to lose. You tell me how much of my pie you want and how much you’ll be happy with. My band is the pie. We fill out all these rooms with paying customers. Now how much do you want?’

“No matter how much they would try to convince me otherwise, I would tell them I didn’t need anything from them because I’ve already got my pie. When you can speak to them on those terms and hold your ground, they eventually tell you what they want. If you won’t play their game, they tell you that they don’t want your pie and you’ll never play again.”

“Even better,” Vince laughs, “because every time someone tries to squash you or tries to take over, when your intentions are good and you’re doing a good thing, you find the people who want to work with you and for you. Now I’ve got those relationships, and I look after this pie. There were a lot of people who thought they knew what I should be doing and thought they knew more than me about the band. They told me it couldn’t be done, wouldn’t last, all of that, and they are the ones who are doing nothing now.”