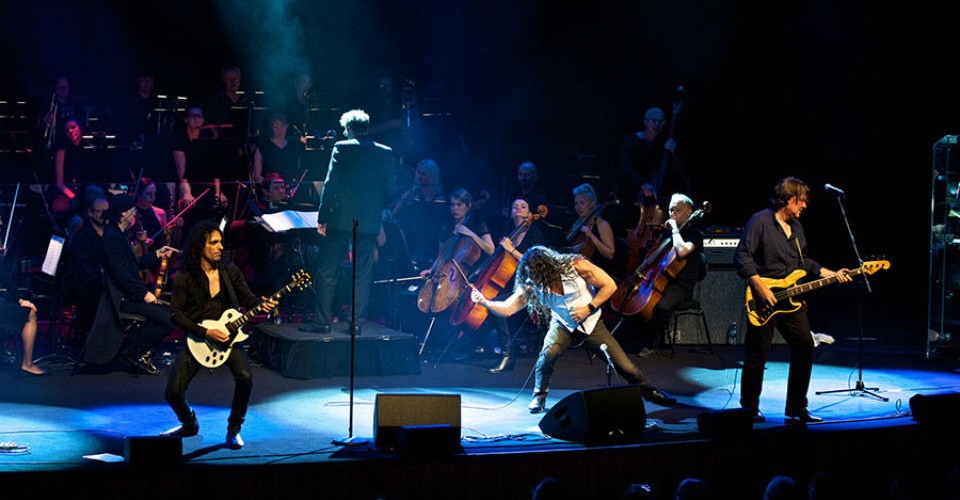 We continue our candid chat over coffee with Zep Boys frontman Vince Contarino and ask whose idea it was to get another 36 musicians together and go on tour overseas?

“It really just seemed like a fun thing to do,” he says. “I was working in theatre and I got a phone call from Australian Music Promoter Mario Maiolo who asked if I could help me out. He had Alice Cooper and Paul Rogers (Free/Bad Company) doing a tour of Australia. In Adelaide, Paul Rogers was booked for the Clipsal concert but, contractually, couldn’t play at the Entertainment Centre, so they need a support band for the show and couldn’t just put just anyone on.

“It had been a while since the band had done anything, but a few phone calls later and the original band were back together and we did a great show! From there, Mario wanted to put us on the road. So, we did some warm up gigs here in Adelaide and then went to NZ. As we were travelling through the South island, everything was so big and it was gorgeous! The landscape, to me, was ‘orchestral’ and briefly thought about how the Zeppelin material would sound fantastic with an orchestra.

“It was much later, and I’m in Queensland doing a one-man show… now I look back at it, it’s unbelievable really…,” Vince laughs as he shakes his head, “it’s funny to think me doing a one-man show in theatre… Mario rings to ask when I want to do these orchestral gigs. He’d been talking to the Adelaide Symphony Orchestra and they wanted to do it, and he wanted me to give him some dates! You could have knocked me over with a feather!”

Vince explains that at that time The ASO were looking for something new to do, so the band had come along at just the right time for them to think about engaging with new audiences. But that the challenges to pulling the whole event together were big and, in some cases, incredibly difficult.

“Well, I could write a thesis on just getting to that first show and it’s not pretty,” he says.
“There were some people in charge then, who didn’t deserve to be where they were. My first meeting with the ASO left me cold and it got pretty ugly there for a while. But I respectfully stood my ground and we eventually had our orchestra. Fortunately, those that had made preparations difficult back then are no longer with the company.”

A rock singer you can really destroy their voice if they don’t look after their instrument. Your voice, after all of these years, is in amazingly good shape. How have you achieved that?

“I’m a classically trained singer,” Vince says. “With classically trained musicians, as with our orchestra members, there are disciplines and rules that we adhere to. Generally in rock‘n’roll, there are no rules. But, in my world, we (the band) are far more disciplined at our craft than you’d think. So, when we’re performing, we can take risks and the rock‘n’roll aspect keeps it gritty and real.”

I can hear the hard work and how you had to keep control over your product. All these decades of the Zep Boys, how did it not become old doing the same thing over and over again?

“Stairway to Heaven… to so many people, it is one of the most beautiful songs ever written but they don’t think they want to hear it again. It’s just too fucking long. And I’m a little bit like that. But as soon as I start singing it and all the music starts coming in, it becomes the first time all over again. Every time!

“And, you know, I’ll never get sick of drinking water because it keeps me alive. I know ‘til the day I die, I will love water, though I’ve been drinking it all my life.” Vince laughs. “The music is the same. The challenges it presents, the skills required, the wonderful feeling you get with the compositions. And this amazing energy you get from the audience loving it.

“We usually do a two-hour show but when we do our club shows, we do three and a half-hour shows. Really, by two hours, I’m spent, gone. I’ve been giving it to the audience for two hours, and they don’t have to give it back to me, but they do. They give back the energy and the love and I can keep going.”

There’s that Shamanic effect that we mentioned earlier.

“That’s exactly right. It’s this wonderful thing and it truly, truly humbles you. You wonder what you have done to deserve this; it’s just too beautiful. So, you rest, you put it out of your mind and tomorrow, you go and do it again and again and again.”