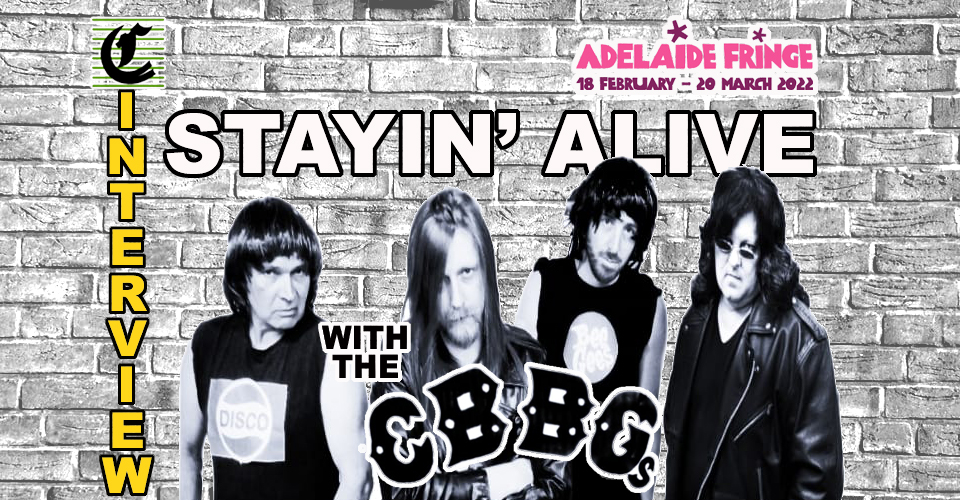 Pete McLaughlin is a veteran of the ‘70s and ‘80s punk scene in London, having played in numerous bands with members of the Sex Pistols, Motorhead, and Stiff Little Fingers. He also worked at Olympic Studios in London with the Rolling Stones, Queen, Prince and Paul McCartney. Around this time he trained as a chef, working in Langons Brasserie, which is owned by Michael Caine. In 2009 Pete moved to Australia, cooking and gigging around Adelaide, so it comes as no surprise that he might come up with the crazy idea to combine the talents of The Ramones and the Bee Gees for a Fringe show.

“The idea is from the Disco Sux Movement in the late ‘70s,” Pete begins. “Punk vs Disco. The Bee Gees representing disco and the Ramones punk. The plan to combine them was ridiculous so it had to be done!”

The name of your outfit is perfect! Whose idea was this?

The name of your show is clearly a reference to The Bee Gees’ big hit?

“The name of the show – Staying Alive –is an ironic nod to the fact that the Ramones and the Bee Gees are not very good at it!”

“It is purely a Ramones tribute to the Bee Gees,” Pee says. “No Medallions or Hairy Chests I am afraid~”

Who is in the band and what is their particular contribution?

“I’m on guitar. The rest of the band consists of: Zach West Paul Ingham and Ben Searcy.

“Paul Ingham plays bass and is a music nut who has worked a variety of roles in the industry including being a roadie for bands across the UK and working at a London recording studio,” Pete says. “He’s bluffed his way into DJing and playing in bands around Adelaide. Relying on ear and instinct he proves that talent isn’t necessary, much like Dee Dee Ramone.

“Ben Searcy is a local singer-songwriter and photographer extraordinaire. He was knocked semi-unconscious taking pictures of the Ramones at the 1994 Big Day Out and has never been the same since, now deluded that he is the incarnation of Joey Ramone.”

“There are plenty of laughs in the rehearsal room, so we hope that an audience will be amused [laughs].”

Is the audience is likely to know all of the songs you play?

“We figured if you went to a Bee Gees show, the set list wouldn’t disappoint.”

“Visually I think it is entertaining,” Pete says, “and I think we have done justice to some great songs. If you love the Bee Gees or The Ramones, then you will love this.”

The Ramones were perhaps known for being a bit loud. Will we need earplugs as well as masks?

“We have a lot of amplifiers, but they are more for show than volume.”

A large part of the Bee Gees’ repertoire included tender, heartfelt ballads. Are the CBBGs up for this?

“We feature a song with a string arrangement,” Pete says, “but if you’re looking for a slow dance you are out of luck!”