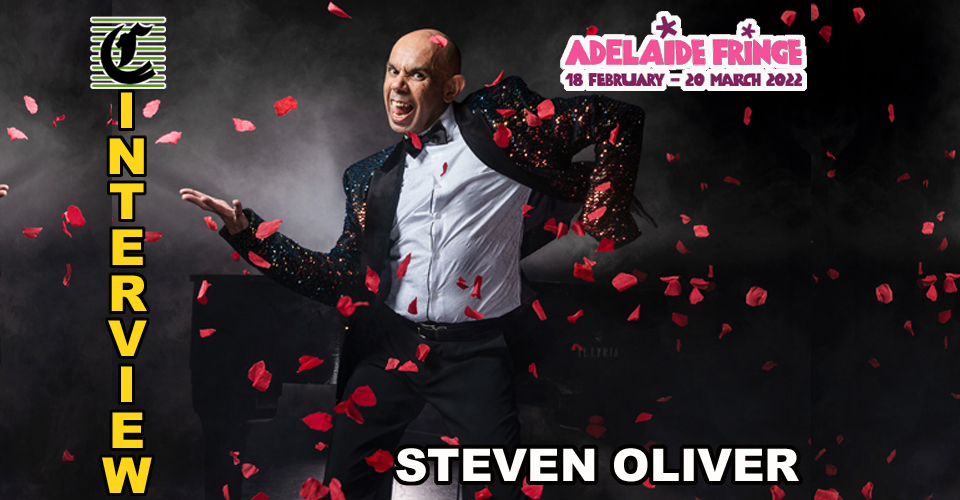 Three years ago on a hot sunny afternoon in a Spiegeltent on the Torrens, Steven Oliver performed the world premiere of his smashing Cabaret show Bigger & Blacker. Even with daylight pouring through (the admittedly lovely stained-glass) windows at three o’clock in the afternoon Oliver pulled out an incredible show that was a deft combination of hilarious, moving, confessional, blistering, outrageous, cutting, fabulous songs and dancing. It’s quite the ride. Stephen is a proud man:  proud indigenous man; a proud gay man; a proud poet; a proud comedian; a proud activist. Is he deadly? You’d better bloody believe it!

Steven Oliver has been performing for a long time, but came crashing into a high profile when he was a pivotal cast member of ABC TV’s Black Comedy, where his feuding Tiddas (sisters) character was a constant, shocking delight that developed into an unusual love story and soon everybody was using the catchphrases ‘What’s this then slut’ and ‘Can’t even…’. And his various help desk bits are classic.

But being ‘famous on the telly’ wasn’t easy for Steven and, after he couldn’t be convinced to return for a third season, he turned to writing and performing and carved his own path with his Sexy Christmas TV Special. Steven created, wrote and starred in the web series A Chance Affair and Faboriginal and developed and produced this exceptional show Bigger & Blacker with long-time friend and collaborator Michael Griffiths – himself a regular fixture at Adelaide Fringe with his own one man shows.

Speaking with Steven, we ask if the show has changed since its debut three years ago?

“That was the very first time we had done this show, and there has been some changes and re-writes. There are a few less songs to fit into the Fringe scheduling, but we are so happy to be able to bring it back to where it began. It’s more refined, we have a different opening and there was a spoken word piece that we have now turned into a song.”

You have a fantastic way with words and are a wonderful poet. Have you performed in Slam Poetry events?

“I have actually,” Steven says. “Not as much as I used to, but I was the runner up in the Queensland State Finals one year so I got to go to the National Finals at the Sydney Opera House. 2015 I think that was. I had always written poetry I had just never read it in front of people before. I went to an open mic night and had mentioned on Facebook I was thinking of maybe getting up and by the time I got there my friend had already signed me up. I came third and then I started going to a lot doing my own poems, like Hate He Said and was very well received and ended up in the National Finals.”

Isn’t it funny that sometimes it takes a shove from a mate to take the next step.

“Absolutely,” he agrees. “I didn’t consider myself a writer even though I wrote about half of the entire first season of Black Comedy. It took three or four years to get comfortable with, but I have written poetry and songs all my life. It still took me until I was 42 years old though!”

And there was always a desire to perform.

“Yes, but again I didn’t think of it as performing,” Steven says. “I used to dance ALL the time, so if there was a party or a BBQ, my parents would get me to dance for our mob. My grandparents would come and wake me up ‘Boy, come and show our mob how you dance’. I’d be out in the backyard in my PJs in Cloncurry (Queensland), dancing ‘til all hours. I wish there was video of that!

“Because I was dancing I got to stay up late while my siblings and cousins were asleep and I got to mingle and be a social butterfly – always something disco or Michael Jackson. Black Is Black, Knock On Wood, should have been a sign if you think about it!

How long ago at WAAPA (Western Australian Academy of Performing Arts) did you meet your musical partner Michael Griffith?

“Well we are at the point now where we have known each other for half our lives” Steven says. “We were 21 and 22 and in our first year studying Musical Theatre at WAAPA, so it’s been about 25 years.”

I loved that Bigger & Blacker is such a complex menu. Yes, it is extremely funny, but it has real emotional heart, fabulous songs, and razzle dazzle but it is moving and many layered. I like that you are taking a bit from this column, and that column and making something that is complex.
“I think part of the problem I had with the ‘fame’ stuff was people expected me to be this one thing all the time. But I am not just one thing. I think people generally – but especially in the industry – get trapped in thinking they have to be just this one thing or have a ‘brand’, which as human beings we are not. We do it with everything, sexuality, I’m gay, I’m straight… they are all boxes that restrict us. But humans are so diverse and so complex, why not celebrate that?

“I’ve had some people come up after a show and say ‘You’re a cheeky slut, darling, You were supposed to make me laugh, not cry!’,” Steven says. “Some people think that it’s going to be just all laughs because they only know the Black Comedy brand, but then they get to go on this ride with me. The biggest compliments as a performer have been that combination of laughter and tears. To see people embrace it, you are seeing humanity, compassion, you are seeing joy. It’s been a healing thing for me, too.”

On top the ‘indigenous’ and ‘gay’ labels you are tagged with, do you feel that people are also trying to put you in the ‘catchphrase guy’ box?

“Sometimes I get asked who the show is for; is it just for Indigenous people, or gay people? I am both of those things, and we definitely need to see more Indigenous people on stage and screen, but really I am just interested in connecting with people.

“I talk about being indigenous and gay, but I also talk about the kind of hurt that can go with being those things,” Steven says. “If you start peeling away those layers – gay, Indigenous, performer – what you are left with is the person. I love talking about music and family because those things are universal. No matter what culture you are from there is music; we all have family.”

Get yourself along to see a true Faboriginal one in all of his awesome! Click HERE to watch a little Steven Oliver teaser!