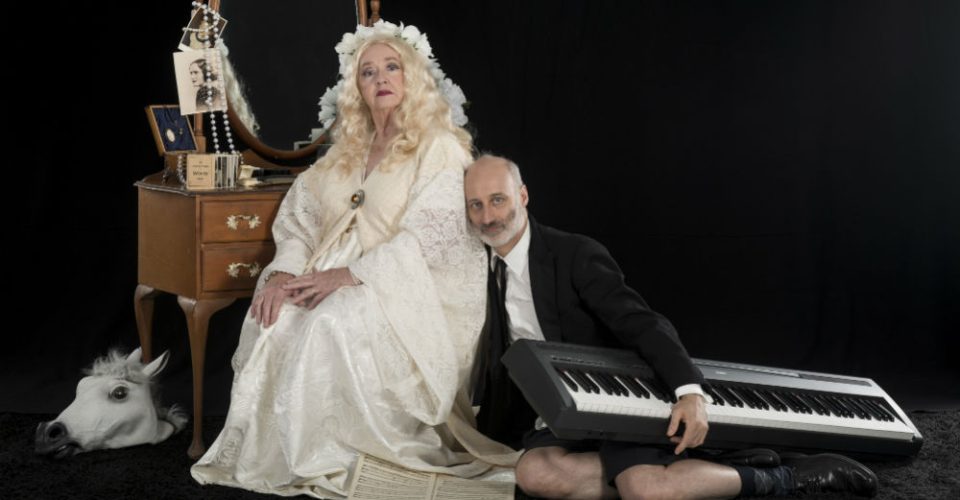 Adelaide’s own Steve Sheehan is a highly awarded comedian, musician, writer, director and performer. In 2014, he performed Steve Sheehan’s Little Boring Story Event at the Adelaide Fringe, but it was his 2011 show,  A Little Horseplay, that led him to creating his Adelaide Cabaret Festival show – Steve Sheehan’s Tristan & Isolde.

We ask Steve how he created this show and how closely it relates to the original grand opera and tragic love story classic.

“It’s actually been a long and winding road to get to this show,” he begins. “In some ways I had no intention of doing a version of Tristan & Isolde. What I wanted to do, from the very beginning, is to have a large animal appear on stage, which I haven’t seen happen before. I was also really interested in working with an elderly woman who sings opera. Again I hadn’t seen many elderly women on stage.

“Being a comedian, I often play around with improvised jokes live on stage, just to see what comes out. I’d alsocome up with this idea of doing jokes while playing the piano, and then there was one other element that came in, and this is where the Wagner arrived. Years ago, I’d listened to the Leibestod aria from Tristan & Isolde and it made me laugh. It was the final aria of the big grand opera and I just found it so funny for some reason. It was just so over the top, such a romantic exaggeration of love. Bit by bit, all the elements of these things came together, and then I just needed to hang it all on some kind of story. The obvious choice in the end was the Tristan & Isolde story.

“It really took a long time for me to read the Tristan & Isolde story because I wanted to see what came up first, what sort of impulses from improvisation on stage with Norma Knight,” Steve says. We played around on stage, looking for ways to make the audience laugh. Then we played around with the horse in front of audiences. It wasn’t until the last minute that I actually read the Tristan & Isolde story; it was kind of a finishing touch rather then a starting point, if you know what I mean.”

Would you call this tapestry you have created comedic or musical, or both?

“Both. It’s got a lot of music in it, but we’re always looking for a comic take on each and every moment that we’re on stage.”

The horse that you mentioned isn’t actually a large animal, is he? Or is that a spoiler?

“No, it’s not a spoiler, as such,” he replies. “In some ways, it too is a bit comic because the ‘horse’ is a big animal but a miniature horse is almost the comic version. Although Arapahoe, the horse, is only 84cm high, it’s quite big compared to anything I’ve seen on stage… or have I? I can’t remember ever seeing an animal on stage.”

Your character, Tristan, is dressed in a school uniform. What’s that about?

“Well, again it comes back to the bumbling hopelessness of Tristan, and even his nemesis, Mark, King Mark, who makes a brief appearance. They both appear a bit schoolboy-ish, I think, because my version of Tristan & Isolde is a little bit nincompoop; they are both a little bit immature.”

The show takes place in a rehearsal room underneath the Festival Centre. Was that part of the design or did that come about in some other way?

“We always had a room in which they were in, but again, the dressing room came quite late in the discovery of the show,” Steve says. “We were going to do it in one of the rehearsal rooms away from the main body of the Festival Centre but that was unavailable. So we ended up in the main rehearsal room of the Festival Theatre, which was perfect, because it is right underneath the stage. So everything about the show that is behind the scenes felt really right. It felt like the audience was actually going to the right geographical location for this piece of theatre.”

Are there any plans to tour the show after the Cabaret Festival?

“We’d love to, although no plans as yet. But if there is anyone who might be interested in taking on the show, we would be happy to see if it works for their venue.”

Is there anything else you would like to tell us?

“In the past I’ve worked solo in improvising ideas on stage and then taking them to a Fringe Festival,” Steve says. “This time I’ve been working with a great crew of talented collaborators over the past two years, but I have really enjoyed that side of the project. Everyone’s contributed so much to the end result that it feels like a real team effort.

“Director Jo Stone, Set Designer Kerry Reid plus Nic Mollison and Stuart Day on lights and sounds respectively, have been great to work with. I’ve worked with Jaci and Joey McEvoy and the horse for four years, and that’s no small ask. It’s great to find people who are not in the arts, who are willing to get involved and participate really generously. It’s just fantastic.

“It was my producer, Belinda Hellyer, who said to me, ‘Well, what are you going to do next?’ She’s been on board supporting the show all the way along,” he says. “It just amazes me how anyone can do anything by themselves because when you have a team around you, it is that much better. Theatre is that much of a team.”