The Story Of My Life: A Musical About Love And Friendship And The Days In-Between – Feast Festival Interview

Adelaide Feast Queer Arts Festival has risen like a phoenix on its opening weekend with performances from the wonderful International Ambassador Conchita Wurst. As Conchita prepares to leave Adelaide, it allows us to bring our attention to the fantastic Feast Festival theatre, comedy and exhibitions that are available for audiences to immerse themselves in for the remaining two weeks.

The Story Of My Life is one such musical that makes its Australian premiere during Feast and promises to have you searching on Facebook for your childhood best friend you have lost contact with. It is a touching story of two men who as children were best friends, but who drifted apart as they grew up.

Produced by Davine Interventionz Productions, known for other musical hits, Altar Boys, Xanadu and Flowerchildren, The Story Of My Life features experienced Adelaide performers David Salter and Paul Rodda. David and Paul are led by director David Gauci and supported by a nine-piece orchestra under the musical direction of Peter Johns.

The Clothesline speaks with David Gauci prior to opening night at Star Theatres in Hilton, as ask him to tell us about the show.

“We begin with Thomas, played by Paul Rodda, walking into a chapel and having to prepare the eulogy for his childhood friend Alvin, played by David Salter. What transpires is a beautiful retelling of their friendship and how each of them deeply affected each other. It’s a love story of two men, who share a profound connection that remains even beyond the grave.” 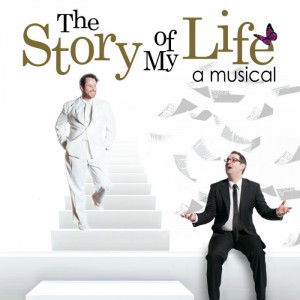 David comments on how since the first reading of the show he has felt a compulsion to make contact with old friends and says the two actors have done the same.

“They are both extremely talented, highly intelligent and committed to the process,” David says. “I gave them the script, asked them to read it and to listen to the sound track. I’ve never had actors jump so highly and quickly to be a part of a show. They are exciting to watch together on stage and it’s been wonderful to see their generosity of acting grow too.”

Have they bonded and become close friends off stage as well as on?

“It’s interesting you ask that. I would say definitely,” he responds. “I’d suggest that the experience of doing this show will be one that keeps their bond strong for years to come. I know they would love to run it again sometime, partly just to work with each other, but also to be with each other too.”

What prompted you to put on this show?

“One day a good friend of mine said, ‘Hey there’s this show with some great songs you should teach your vocal students called The Story Of My Life. You should listen to it.’ I was hooked the first time I listened to the sound track. It’s beautifully crafted and orchestrated.

“It’s a little bit Bernstein, a little bit Sondheim and a little bit William Finn. It’s delicious, funny, and clever, very clever. It’s lush and uplifting. I decided that I would use the full orchestration for the show, given it may never play in Adelaide again. I wanted to make sure that people heard it in its fullness.”

Why did you want this to be a part of Feast?

“Well, I think the word ‘queer’ would fit the character Alvin well,” David says. But more importantly the moment people think a male love story we either think, ‘Gay’ or ‘Bromance’ – but this musical, and its story, show that love between two men can be more than a something that fits comfortably in a pigeon hole. The Greeks would tell us that the love that Thomas and Alvin has sits somewhere between Agape and Philia.”

David says the final rehearsals went wonderfully and the show is looking and sounding brilliant. We finish by asking why people should come and see The Story Of My Life.

“To reconnect, to be uplifted and to see an Australian Premiere in Adelaide. I want people to take a risk at awakening the feelings and bonds of friendships long past.”

The Story Of My Life performs at Star Theatres from 8pm on Wed 18 Nov until Sat 21 Nov. Auslan interpretation Fri night and Sat matinee performance.

Book at Outtix. Click HERE to purchase your tickets.