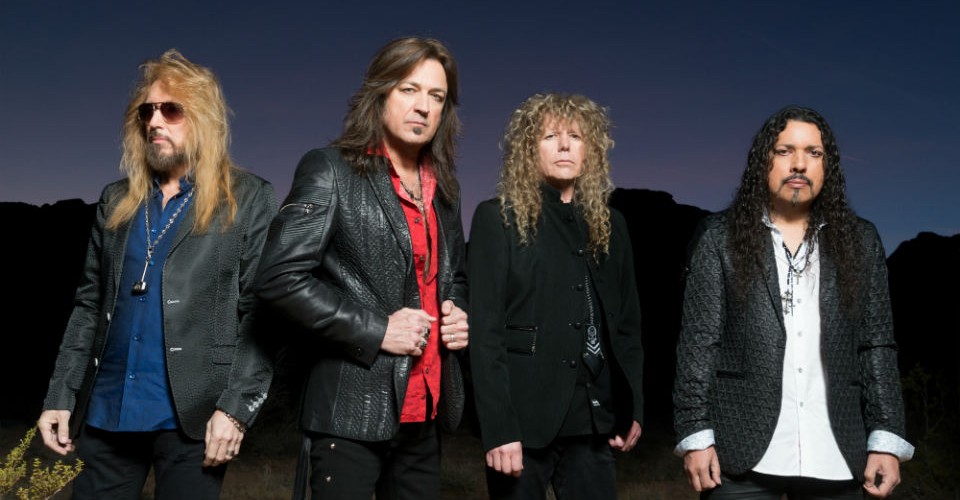 For the first time in eight years, Southern Californian, multi-platinum crossover Christian heavy metal band Stryper is coming back to Australia to tour their brand new album God Damn Evil. Presented by Silverback Touring, the inclusion of the Governor Hindmarsh Hotel in their tour dates sees the band performing in Adelaide for the first time since 1989.

Excited to finally return to Australia, singer and guitarist Michael Sweet speaks with The Clothesline about their new album and tour.

“It’s been too long. And we’re excited to come, y’know? We’re prepping and putting a few extra songs in the set, combining old classics with new songs and working out something special for everybody.”

Looking back on your career you appear to be quite heavily involved in the production side of things. Do you like to take the helm when recording and writing or do you prefer to work more closely with the band?

“I like producing because I’m one of those guys that believes nobody knows the music or knows what they want in terms of the music as well as the band,” Michael says. “We’ve worked with a few great producers over the years, but it’s still a little aggravating at times when you feel that you’ve just spent all this extra money – because producers often get huge cuts in points, and dollar advances.

“You pay this much money and the end result, at least in my mind, isn’t really any better than anything we could have achieved on our own. We’re kind of proving this with certainly the most recent album. We have this system down where we can do it on our own and we don’t really need a producer to come in and take our points and our money, y’know [laughs]?”

There’s great sonic consistency, I’ve noticed, in Stryper’s albums from the ‘80s to today. The sound of the mix (particularly the guitars) and the song formulas on the likes of God Damn Evil make you feel like you’re a teenager in the middle of the ‘80s sitting on the floor of your lounge room listening to vinyl records. Is this something you have been aiming for?

“Absolutely,” Michael enthuses. “We’ve been trying hard to get back to who we were and who we are, really. We’re a heavy metal band. We started out as a metal band and we’re going to end as a metal band. We got a little syrupy from time to time with ballads, and there’s nothing wrong with ballads, but for example, the album Murder By Pride was not really a metal album, and we are a metal band. So, with No More Hell To Pay and Fallen and especially now with God Damn Evil I feel like we’ve come back full circle to who we are. 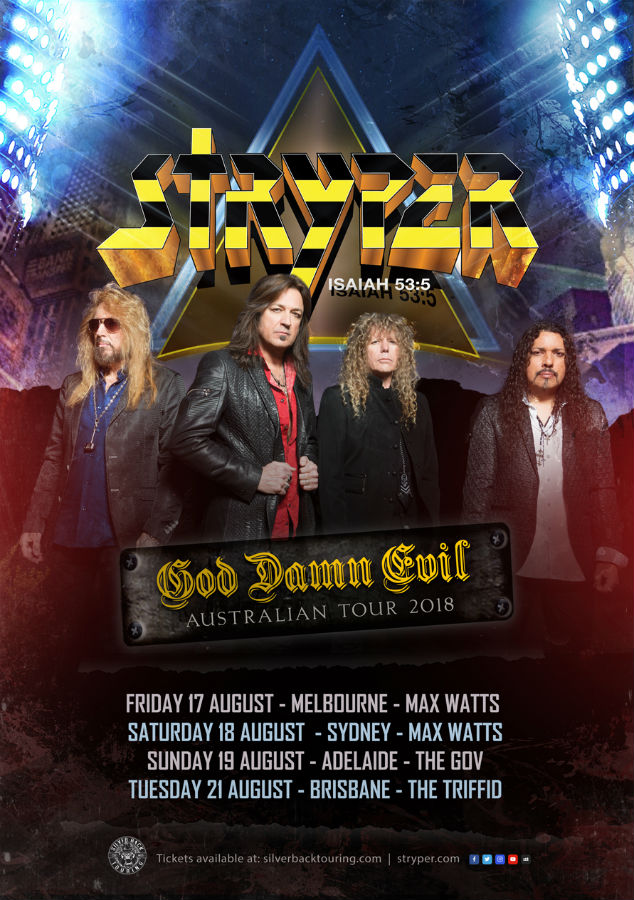 “And, we’re a guitar band; we always have been,” he adds. “We love vocals and everything, but I mean, Oz and I are heavily influenced by Eddie Van Halen and Randy Rhoads, some of the great players of the past and we grew up on and cut our teeth on that, and it’s nice to showcase that – we’ve always been about guitars, for the most part.”

God Damn Evil was recorded at Spirithouse Music. What was it like working with Danny Bernini?

“Well, we love Danny and Paul,” Michael says. “Paul McNamara owns the studios and Danny Bernini, who used to be in a place called The Hit Factory in New York City, is the engineer. He’s a world renowned engineer, a musical guy, a great musician, a great writer and a great asset to have.

“Our first time working with him was on Murder By Pride and it’s been an absolute pleasure; we have great chemistry and work so well together and we’ve made a lot of albums together – I think this is number nine or ten? In terms of projects, that includes Sweet and Lynch and solo albums.”

Michael explains that due to commitments and conflicting schedules, they were unable to record this album with bassist Perry Richardson.

“That being said we can’t wait to get Perry on the next album! It’s gonna be killer! John O’Boyle played bass on this album, as well as my last solo album One Sided War.”

In your opinion, what makes a good song?

“To me a song is all about the connection,” he says. “If you can’t connect with people through the song you have a serious problem. It can be complex or simple, it’s not so much about that, but it is about connecting and memorable parts. Melodies, lyrics and guitar solos that people can remember – these are the things that go into people’s hearts and minds and ears and make that mark and leave an impression. I always try to, as a writer, apply that when I’m writing a song.”

There are a lot of people who think musicians have a responsibility to reflect on the world through politically influenced lyrics, whereas others think the correct approach is a light-hearted one. Where do you think you stand in between these two ideologies?

“Well, y’know, it’s a toss of the coin. I guess it just depends on what each individual musician wants to do. I’m okay with the light-hearted approach. But, I’m also okay with getting deep and political and spiritual; obviously Stryper has proven that. The people that say “oh, you gotta leave politics out of music”… baloney! I mean, if that’s what you want to do and what you want to sing about, absolutely go for it!

“It’s an incredible thing to stand before people and be able to give them something more than just music and a silly song; you have the attention and the influence on many people and I think it’s such an amazing opportunity.”

With songs such as Sorry and You Don’t Even Know Me you tend to focus on personal relationships and the moral lessons one can learn from that. Would you say this is a shift in your writing or perhaps just a sign of maturity?

“Yeah, I think it’s a sign of maturity,” Michael says. “I’ve come to learn over the years that all the things we sing about now directly pertain to our faith. When we’re singing about relationships and being loyal and faithful, that’s biblical. When we’re singing about being a good person and not talking trash about other people and not judging other people and just being a nice good hearted person, that’s spiritual. So it all comes back to what we stand for and what we put our faith in, which is God’s love, God’s mercy and God’s grace.”

What are your future plans for Stryper?

“Oh, I’m leaving the band in two days! No, I’m only kidding,” he laughs. “I feel like there’s a lot more in store for Stryper, as long as we stay healthy and happy we can continue doing this until we take our last breaths. Stryper may go for another ten or twenty years but, at this point in time, I feel like we’re a bullet train going down the tracks and we’re certainly not applying the breaks any time soon.”

Yes, I suppose that’s what comes with being a musician – there’s no set retirement age.

“There really isn’t!” Michael agrees. “Unless you put that upon yourself, and apply that expiration date on yourself then you kind of have to live with that subconsciously hanging over your head. But we don’t think that way. We just think ‘let’s have a great today and we’ll talk about tomorrow tomorrow’.”

What can we expect to see on tour?

“We’re doing a long set of about twenty songs. We’ve got about as much as we can cram in there from old to the new, and we’re excited to get on stage and see our Australian friends and fans, to be able to converse with and have that personal experience with them. It’s going to be amazing.

“We’re sad that it’s been eight years since we’ve come but, at the same time, we’re really happy and blessed that it’s happening,” Michael concludes. “So we’re thrilled, man! We can’t wait. We’re going to eat some good food and catch a little bit of that amazing Australian spirit!”

Book at The Gov or oztix.com.au. Click HERE to purchase your tickets. 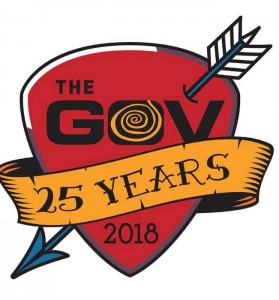