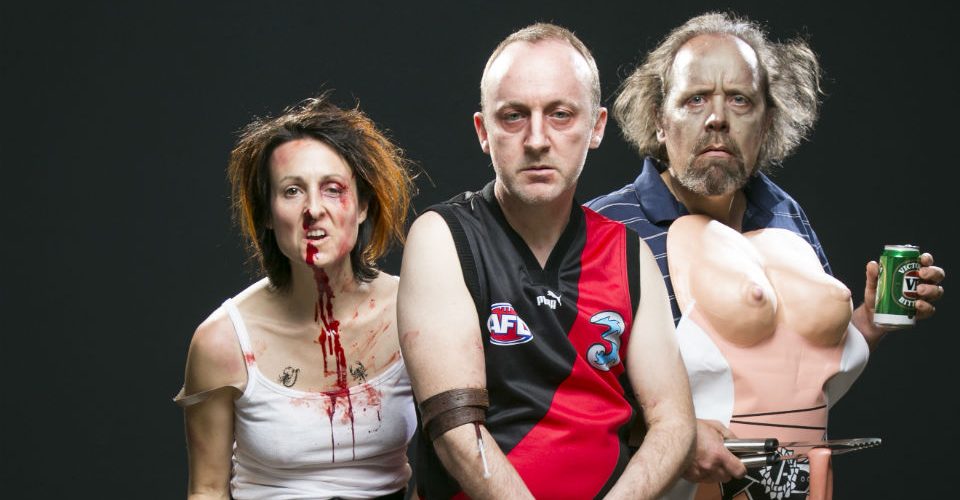 [ADELAIDE EXCLUSIVE ~ AUS ~ IF YOU LOVE… TO LAUGH]

Is Australia dying a slow death, strangled by its own ignorance and stupidity? Do we really need one hopeful politician singing Twisted Sister? Are Neo-Nazi rallies the best thing some people can do with their time? And whose idea was it to give Kyle Sandilands a microphone anyway?

From the multi Green Room Award-winning creators of The Beautiful Losers comes a proudly politically incorrect, painfully honest satirical piss-take, creepy but hilarious look at the darker side of suburban terror. Featuring original songs performed by Karlis Zaid, Aurora Kurth and Mark Jones on piano, we speak with Karlis Zaid, via email, and begin by asking him to tell us about Suburban Gothic.

“Suburban Gothic is a darkly comedic thrill-ride through the underbelly of Australia… All the songs and words are original, written by m’self, Mark Jones and Karin Muiznieks. There’s some… colourful turns of phrase… just like in real life.”

How did you all meet and how did the idea for this show come about?

“The show sprung from my dark and twisted noggin…” Karlis says. “I wrote some of the words and music a few years ago with Karin, but then she buggered off to live in New Orleans (true story). Mark and I had worked together in a similarly satirical group called The Beautiful Losers, which won some awards, and came to Adelaide Cabaret Festival a couple of times, so we picked up the proverbial ball and ran with it, bringing the excellent Aurora Kurth on board to provide sumptuous vocals, theatrical flair, and to keep the testosterone under control.”

In this overly politically-correct society we are living in, are there any lines that even you won’t cross? Or is everything fair game?

“Eeexcellent question (does Mister Burns ‘spider-fingers’)! In satirical comedy, everything is fair game, yes. Lines are made to be crossed. But you have to know why you’re doing it. There’s no point in offending people if it’s only for a cheap laugh. There needs to be a reason. Our laughs are very expensive…

“Some of the songs have been performed before at Adelaide Cabaret Festival before,” he says, “but this show is just for you lucky lucky Adeladies….and Adelads.”

Is there audience participation in Suburban Gothic, and if so how much of the show is dictated by the direction the crowd takes it?

Are there plans to take this show elsewhere?

What is your favourite part of the show and what do you most enjoy most about working with the Mark and Aurora?

“I love watching the other guys sing solo, because they’re fucking awesome!” Karlis says. “And I get to have a break.”

Is there anything about yourself or Suburban Gothic that you would like our readers to know?

“As we stress very clearly in the show: this is merely satire, ladies and gentlemen. We don’t want you to have nightmares (unnecessarily) or to sue us… As for me, weeeell… if I pick you out of the crowd and taunt you…grab me a Maker’s Mark with a dash of dry, slice of lime and no ice, and I will apologise to you very sweetly…”