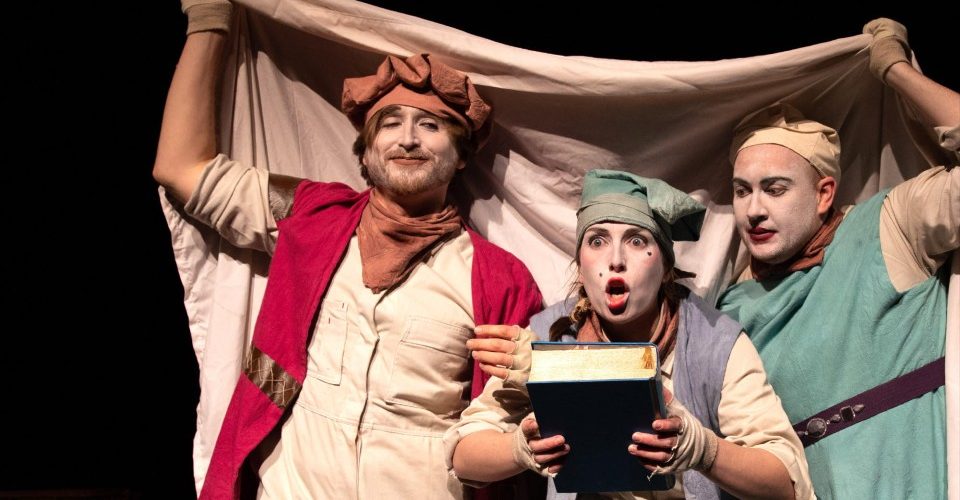 Written for, and debuting at the 2019 Edinburgh Fringe Festival, Switch Witchetty and the warring Royal siblings were invited to pack their bedsheets, milk crates and paper swords and present themselves at the Adelaide Fringe  2020. They are back again, with a production which promises to keep the shorter adults entertained and heading home to raid the linen press and the kitchen cupboards… don’t say that you weren’t warned.

This energetic, fast moving children’s musical takes us on a search for a suitable replacement for the recently departed King. Will it be the Prince or the Princess who inherits the throne? Before the rivals tear the kingdom apart, Switch must choose – hero or fool?

We chat with Kaleigh Wilkie-Smith (Director) and Alex Giles (The Princess and several of the 16 other roles) about the show – which they wrote and produce though Sydney-based independent theatre company Pinwheel Productions. Pinwheel has produced a number of children’s shows and we suggest that, like all good fairy tales, they have lessons for the audience.

“Yes indeed, we want to tell stories which will make the children think as well as enjoy a good show. We show them that they can use all sorts of things from home to make their own adventure; too much is about entertaining kids with a small screen.”

The use of ordinary items like bed sheets, pots and pans, torches, paper swords and milk crates is brilliant; where did the idea come from?

“In 2017 Pinwheel produced The Tale Of Ichabod Scrubb, and wanted to recapture this quirky spirit we discovered in using simple items as props, things that you can easily lay your hands on. We have bought that concept, thanks to our designer Elle Cantor – to this one too. We both wanted to be able to stir the imagination and show children that you can have huge adventures without lot of fancy props, it’s to encourage them to see what they have readily available to turn into a castle (milk crates), swords (a rolled newspaper), a cape (a bedsheet), tools (pots and pans)…too much emphasis it put on using that small screen to capture a child’s imagination.

“Apart from the milk crates, all the props fit in one suitcase – that makes relocating the show very simple” 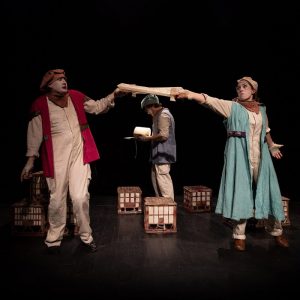 So, is this the same production that audiences fell in love with last year?

“Essentially, yes. We have tightened it up a bit, but the plot remains the same. Jarryd Prain is back as the Prince (among other roles) but this year we have Sasha-Lee Saunders as Switch. There might be one or two surprises for those who came along last year. Alex still comes across with his touches of Monty Python, (we hadn’t noticed it until a few reviewers made mention.) The audience still gets treasure maps to follow and paper crowns to wear. We saw them all over Adelaide last year, it was hilarious.”

Three people sharing 16 roles on stage; is it challenging?

“Ah yes! That’s why we started rehearsals and blocking a few weeks ago. Miss a character change and you are literally paddling the wrong boat (see the show and you’ll understand that one.)”

In 2019 you were at the Holden St Theatres. How did that venue work for you?

“It was brilliant; the management team couldn’t have been better if they had tried. There was easy access for the audience and the stage area and facilities were great. This year we are at Gluttony, which is lot more central to other events. We are looking forward to seeing how that venue goes and being closer to the action.”

This last year has, thanks to Covid 19, been a hard one for the entertainment industry. How have you managed to get here for 2021?

“Last Fringe we were all on edge, as Covid 19 was just breaking and the last week of the festival was in doubt. There has been little ability to stage any productions in the last year. We were fortunate enough to receive a grant from the Adelaide Fringe Artists Fund, as well, our final show will be Auslan Interpreted by Deaf Can Do – so we got a grant for that. It’s going to be exciting having the show interpreted and open to a wider audience of the hearing impaired.”

Post Adelaide Fringe, what plans do you have for Switch Witchetty?

“We’d like to take it on the road. We would love to do a regional tour and play at place like the Mount Gambier Fringe or the Bunbury Fringe in WA. We are at the upcoming Newcastle Fringe Festival in NSW. Long-term, we want to develop the marketing right so that others can take it and put it on – schools and other theatre groups could do well with it.”

Having previously seen this production I can almost guarantee that your ‘inner child’ will have a ball as you remember all the fun of playing with the simplest of things. The tunes are catchy and memorable, and be ready for an interesting ending.

Limited season only so get in quickly!

Switch Witchetty Almanac Of Everything performs at Ukiyo at Gluttony – Rymill Park / Mullawirraburka from 2:15pm on Sat 6 Mar until Mon 8 Mar.