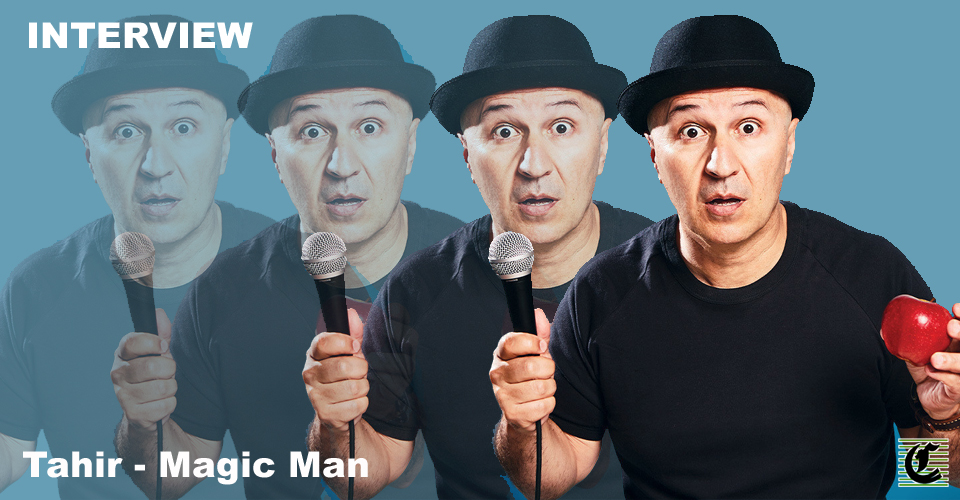 When lockdown becomes and every day word in your life, there are so many things you could do to pass the time away… wash the curtains, increase your collection of belly-button lint… or you could write a couple of new shows to bring to Adelaide Fringe 2021. Landing in Gluttony and part-way through his seasons, Tahir brings his own brand of comedy and magic to the stages with TAHIR: ADULT COMEDY MEETS S#!T MAGIC and Tahir – The World’s Best Worst Magician.

We speak with Tahir and suggest correctly that is has been an extremely weird year since we saw him last and ask what he has been doing to keep busy.

“Like everyone else … cleaning the blinds for the first time. That’s when COVID really hit hard for me! I also spent time writing and working on future TV shows and other projects.”

It’s great you are coming back, and bringing some more of the magic – literally!

“The magic was a highlight last year,” Tahir says, “so, yes, there is more this year! The worse the tricks, the better the audience loves it. Every now and then a good trick surprises them!”

This year you are bringing us two shows, Adult Comedy Meets S#!t Magic and The World’s Best Worst Magician. Can you tell us about them?

“My first show is an adult show of comedy, stand up and shocking gigs I had to accept because of the lockdown – all combined with shit magic! The second show is an ALL-ages magic show with some decent tricks and a lot of involvement for the kids.”

Is this the first time performing a children’s show, and where did the idea come from?

“Yes, The World’s Best Worst Magician is my debut children’s show and this has been coming for a while,” Tahir says. “I have been in that headspace for a number of years and i absolutely love it!”

“The thing is I have always collected tricks and been interested in magic, but my passion will always be stand-up comedy. I love stand-up so much and enjoying it more and more each year. I genuinely appreciate and love what I do… however, in another lifetime, I might have been a comedy magician. I thought why not combine the two for this year. But I will never stop doing stand-up.”

So, what’s your favourite magic trick?

“Any trick that fails!” Tahir says. “There a few in my show; the audience think it has failed but then there is a surprise twist at the end and ‘ta dah’ it works! I love seeing the audience reactions when, every now and then, I actually do an impressive magic trick!”

I see you are also hosting The Official Gluttony Variety Showcase – Best Of Circus, Magic And Comedy. Can you tell us about that?

“This show is going to be one big show in a massive tent this year – and the line-up is truly incredible (Choir Of Man, Twerk It and Reuben Kaye, just to name a few!) People should come along to this show every year because there’s not another like it where you get such brilliant variety and bang for your buck!”

You recently got the chance to perform once again with your fellow ‘Wog Boys’. Are there any plans for shows with them on the horizon?

“Yes,” he says. “After Adelaide Fringe we will be touring a show called Crazy Rich Ethnics – a stand-up spectacular with George Kapiniaris, James Liotta and Gabirel Rossi, back at our old stomping ground The Arkaba Hotel.

Is there anything else you would like to reveal?

“I have just finished a secret TV pilot.” Tahir says. It’s a very fresh, unique show and we’re really hoping it gets picked up. I can’t say any more than that, but this is the first I have mentioned it in the media! The Clothesline scoop!”

Tahir also performs Tahir – The World’s Best Worst Magician (All Ages) at The Octagon at Gluttony from 12.30pm until Sun 21 Mar. Book at FringeTIX on 1300 621 255 and adelaidefringe.com.au. Click HERE to purchase your tickets.