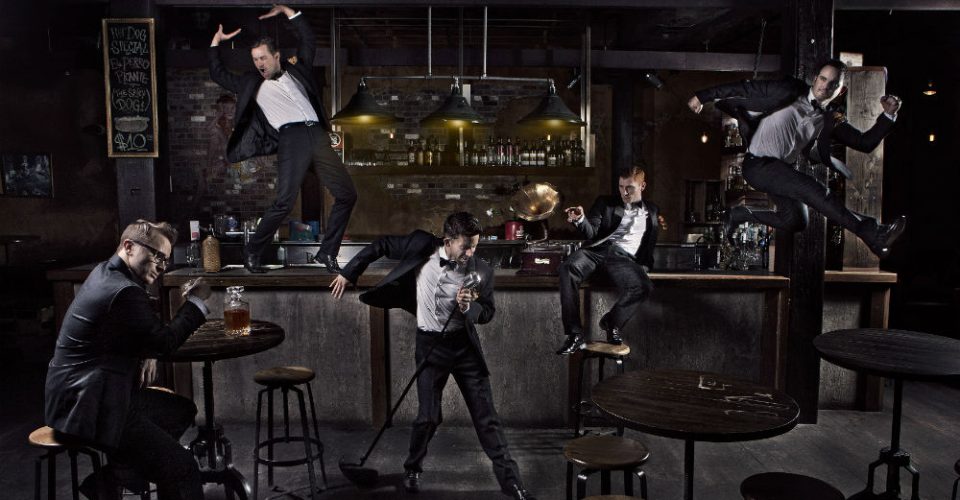 Channelling the smooth energy, cool moves and stylish finesse of 1960’s all-star group The Rat Pack, choreographers and dancers Jesse Rasmussen [Grease The Musical, Hot Shoe Shuffle], Jordan Pollard [Guys And Dolls, Tap Dogs] and Thomas J. Egan [Tap Dogs, The Great Gatsby] have brought together some of Australia’s finest tappers and created The Tap Pack. It’s a show filled with slick suits, swing classics and sensational tap dancing. They sing, they tap, they joke and they are bringing their show to the Adelaide Cabaret Festival 2015.

We speak with Jordan Pollard, who is excited for this Adelaide premiere but disappointed not to be performing at the Cabaret Festival due to his prior commitment with Melbourne’s season of Anything Goes.

“It’s an amazing blessing to be a part of this festival,” he begins. “I think it’s the most wonderful opportunity and we’re really looking forward to our first time there – even though I can’t personally be there. The Tap Pack is only three years old,in show years, and we are constantly reworking things so it’s always feeling fresh for us.”

As co-creator of The Tap Pack, tell us about how you guys got together and what inspired you to create this show.

“I always like to take that question back to the parallels of how The Rat Pack began – Frank Sinatra, Dean Martin and Sammy Davis Jr. As far as we know, they were just a group of friends who were very talented, got together and started performing shows and doing what they loved – which shone through in their performance.

“Jesse, Thomas and I were already good friends when we got together,” Jordan says. “We wanted to infuse our love of all those other legendary old school performers like Gene Kelly, Fred Astaire and Frank, Dean and Sammy, to capture and recreate that cool classic energy that they had. We’re not them, so we had to find out what we loved and put that into our show – which was tap. We all grew up tapping as young kids, so that was the bonding trait between us.

“We choreographed a few routines, called ourselves The Tap Pack, performed at a wedding with some of the routines. I then wrote a page of jokes and some little comedy skits that we found funny… and it went from there. We then wanted to develop the show further, turn it into a variety theatre performance and make something really worthwhile of it.”

The guys then enlisted the help of friend and Director, Nigel Turner Carroll.

“Nigel worked with us to shape The Tap Pack into what it is now; which is a comedy skit, insanely hard and fast tap dances, hat tricks, games and jokes while putting our spin on the classic songs while infusing artists like Ed Sheeran, Beyoncé, Bruno Mars and Justin Timberlake. So, it’s old-meets-new with a fresh new flair and a twist of lemon.

“What we’re bringing to the Cabaret Festival is a new show,” he says. “We are always trying to better ourselves and keep it fresh, to keep pushing the boundaries, so we have reworked the show to bring something that no one else has seen before. We’ve chucked in some new numbers, and have a brand new cast member in Sean Mulligan.

“It’s not that easy to cast members for this show as they need to be that triple-threat of singer/dancer/actor plus a tapper, so we’ve got some ex-Hot Shoe Shufflers and ex-Tap Dogs – each of them great in their won rights – and then Nigel who pulls it all together. The Tap Pack is about infusing the show with whatever cast members are on board so we like to give them the freedom and the creativity to do what they do.

“It’s a lot of work and a lot of fun, but it also leaves space for creativity and spontaneity – which means each show is fresh.” 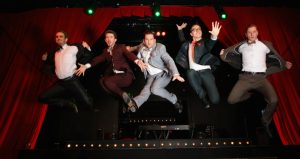 “Although the main choreography comes from the three co-creators, each member brings their own special something to the show; whether it’s Christopher infusing dance along with the guy on the keyboard, or a spontaneous tap solo with the drummer, which is awesome because he is a legend in Australian tap dance. He’s one of the originals from Tap Dogs and Hot Shoe Shuffle and is one of the best in the business. So even though Jesse, Thomas and I do most of the choreography, it is open for each performer to add a touch of what they do best to the show.”

Michael Bublé helped to revive The Rat Pack music, while Tap Dogs and Stomp brought tap into the fore. How do you go about blending the old and new songs within the show?

“We like to say that we ‘swingify’ the popular songs,” Jordan says. We have this great medley that begins with Come Fly With Me, moves into Ed Sheeran’s Thinking Out Loud, which then goes back into Feeling Good and onto the Sam Sparro’s Black And Gold before flowing into a little Ray Charles for good measure and then finishes with Forget You by Cee Lo Green. They all flow into each other quite nicely.”

Where does the comedy fit into the show?

“It’s more the interactions with each other,” he replies. “All the guys have great caricatures of themselves. There are some fantastic relationships on stage and, just like The Rat Pack who just came out on stage and mucked around, we have a good camaraderie and brotherhood bond which you can definitely see; be it comically or in a heartfelt moment.

“We’re bringing a show that’s got as much crammed into it as possible to ensure that people will leave smiling.”

The Tap Pack will perform in front of a live band with members of the Adelaide Art Orchestra and the group’s own keyboard player and drummer.

“This blend of our own and your local musicians is really going to make the sound pop,” Jordan says. “The show is basically for everybody, aged eight to eighty; full of joy and full of heart. These boys are some of the best tappers in Australia and they’re the coolest guys I know. We’ve all put our heart and soul into this show and I think that can absolutely be seen by the audience.

“We’re really trying to push the boundaries with this show. Tap Dogs was an 80 minute performance of just tap and it was so great. Then, you could go to a cabaret show to hear people sing those classic songs, which is just as awesome. By infusing the two, hopefully we’ve got something that may have been seen before, but never like this.”