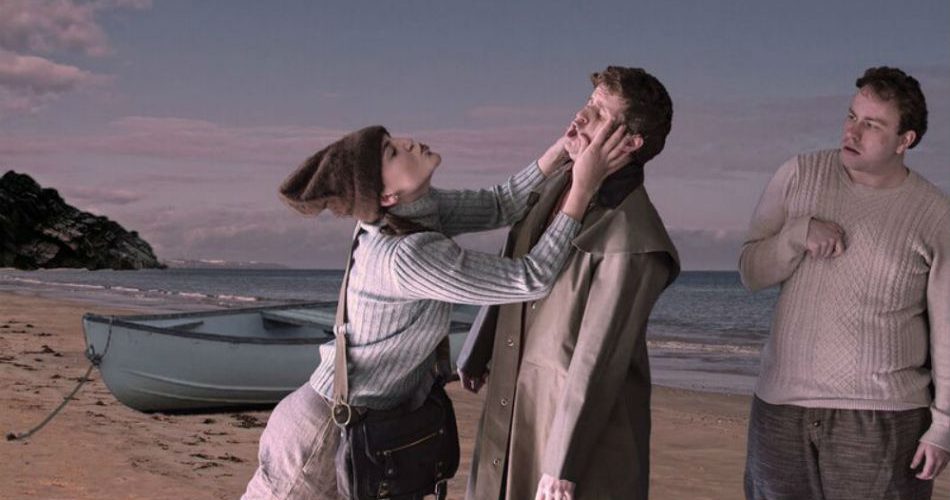 Adelaide Director Kerrin White continues a long and successful association with Adelaide Reperatory Theatre as he presents his latest production, Martin McDonaugh’s The Cripple Of Inishmaan. Regarded as one of McDonaugh’s best plays, the story is set on the small Aran Islands community of Inishmaan off the Western Coast of Ireland in 1934. Local lad, ‘Cripple’ Billy Claven, is excited to learn of a Hollywood film crew’s arrival on a nearby island and makes it his mission to land a role that will rescue him from his miserable, boring, existence.

The Clothesline meets with Kerrin White, and begins by asking what he finds so appealing about McDonaugh’s writing, having already directed a number of his plays for The Adelaide Rep.

“I guess it’s the inventive Irish language he uses that I find so interesting. It’s all about the cadence of the language; we would say ‘do you want a bowl of porridge?’ whereas his characters would say ‘is it a bowl of porridge you’d be wanting for yourself?’. It is how the Irish speak but McDonaugh takes it further.” Kerrin says, “It’s almost a ‘fantasy Irish’ he’s created – made up from growing up listening to his own Irish relatives, (McDonaugh is of Irish descent, but London born) and taking bits from here and there so in a sense it is a fantasy world that he creates that’s unique to him.

“He is still seen as an outsider, but he has that outsider’s eye – he can talk about and discuss things in a way a native Irish man can’t – I guess he has a different perspective which is interesting and unique.”

The subject matter is often humorous and quite dark at the same time. Is this also part of the appeal?

“There’s a modern content within a traditional play structure” he replies “McDonaugh has been called the ‘Irish Tarantino’ – his use of violence and language is very reminiscent of that director’s style and I find that appealing also. He’s able to change mood very suddenly so one minute everything is going well for characters and then in a split second something happens and you suddenly gasp. I’ve been in an audience where literally everyone gasped at once. That’s great. He’s very clever at doing that kind of thing.”

You’ve done a few McDonaugh plays. Was The Cripple Of Inishmaan simply the next logical choice? 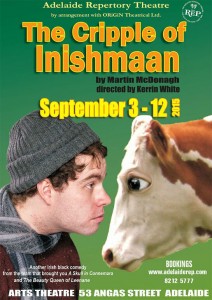 “The Beauty Queen Of Leenane is the production that I am most proud of in my 25 years of directing. I also directed A Skull in Connemara for The Rep. These were the first two parts of The Leenane Trilogy – the third one is called The Lonesome West but is difficult to stage – at one point an oven has to explode!” he smiles. “In the end we decided that was a little beyond our means.

“Then there’s the second trilogy called The Arin Island Trilogy and ‘Cripple’ is the first of that particular trilogy. It’s just one of his best plays,” Kerrin says, “It’s a little bit gentler than The Queen Of Leenane perhaps and it just has a fabulous ending where everything just changes in a heartbeat – the audience will be left going ‘Oh no!’ I think it will really move people.”

Your most recent play for Adelaide Rep was Dracula. What is it about the dark and gothic that attracts you as a director?

“Yeah, my mum is always asking why I can’t do something nice for a change,” he laughs. “I guess it’s probably an antidote to a lot of ‘oh dear I’ve dropped my panties’ theatre around the place. They’re fine, of course but it’s just nice to do something grittier.”

There is definitely plenty of grit to be found in McDonaugh’s writing, but a great deal of comedy as well.

“The humour is in its recognition of the characters. After The Queen Of Leenane a number of people came up to me to say, ‘That horrible old woman! She was just like my mother!’ and you think, ‘Oh my god what kind of childhood have you had?’ Certainly in Cripple there are a couple of old aunts who are annoying and I’m sure audiences will recognise those two among their own relatives. There’s also an old gossip that sees it as his vocation in life (to spread the latest news), whereas everyone else thinks he’s just a pain in the arse.”

You are currently deep in rehearsal. What are the challenges?

“The big challenge with these plays is the language, the accents and audience understanding of those things. If you have characters with a really thick accent the audience won’t understand what they are saying. It’s that fine line of being authentic and also understood – you’ve got to make sure your accents aren’t too thick but are also consistent as well.

“There’s a good book/CD by Robin Blumenthal that the actors are using to get their vowel sounds correct. Also one of our actors is Irish, but he’s from Dublin so has a completely different accent – harsher than the more lyrical accent we need to maintain in the play. Mind you, the audience aren’t necessarily going to know if the accent is authentic or not but if the accents are different they will notice. It’s like American accents – if someone sounds like a hillbilly and then another actor sounds like he’s from Boston and they’re meant to be in the same family the audience is going to wonder what’s going on.”

“No, no pressure at all!” Kerrin chuckles as he shakes his head. “It’s actually a good thing, it being in the news, people know about it – it went from the West End to Broadway and back to the West End again so it really was the talk of both towns for about 18 months – it can only help!”

“Matt played Renfield in my Dracula production, so it’s a very different role. His great challenge is being crippled, and being consistently crippled. What we’ve done is put a brace on his leg to stiffen that and we’ve actually pinned his hand to his chest with a mitten. I’ve insisted he put it on at the beginning of rehearsals and only take it off at the end. I told Matt that when he makes himself a cup of tea or goes to the toilet, he needs to do it one-handed.”

Kerrin admits Matt has probably hated him at times but goes on to explain the method behind his madness.

“He needs to do things like getting in and out of a bed, kneel and pray etc. He was swearing at me like you wouldn’t believe, trying to get down of the bed at one stage,” Kerrin laughs. “But now he’s at the point where we can take the glove off and he can just do it.”

How will Matt interpret Billy beyond the physicality of the role?

“It’s an interesting role because it’s not a wholly sympathetic character – Billy is a bit conniving so Matt needs to try to keep that sympathy because by the end of the play there is this twist where you really have to feel for this character. If he’s too unlikeable, that’s not going to happen. I think Matt has hit the balance really nicely.”

“John has been around forever. He was a professional actor for many years, worked with the State Theatre Company in the ‘70s as part of the ensemble, has worked for John Bell (Shakespeare company), and on ABC radio; he’s got a beautiful speaking voice. John is playing the town gossip, and he’s absolutely fantastic, but he’s such a gentleman in real life, to hear him saying his lines and calling people ‘feckers’ it’s even funnier!”

What will The Cripple Of Inishmaan offer to die hard McDonaugh fans and those who have never seen one of his plays before?

“Hopefully everyone will be delighted, of course, but if you were diehard you’d probably know the play back to front anyway and hopefully find we’ve stayed true to his original intentions,” Kerrin says. “If it’s something new, I think you would find it surprising and funny; you would be moved, but it would keep your interest because it is never predictable. That’s why McDonaugh is so successful.”

Book at Arts Theatre on 8212 5777 or at TryBooking.com. Click HERE to purchase your tickets.