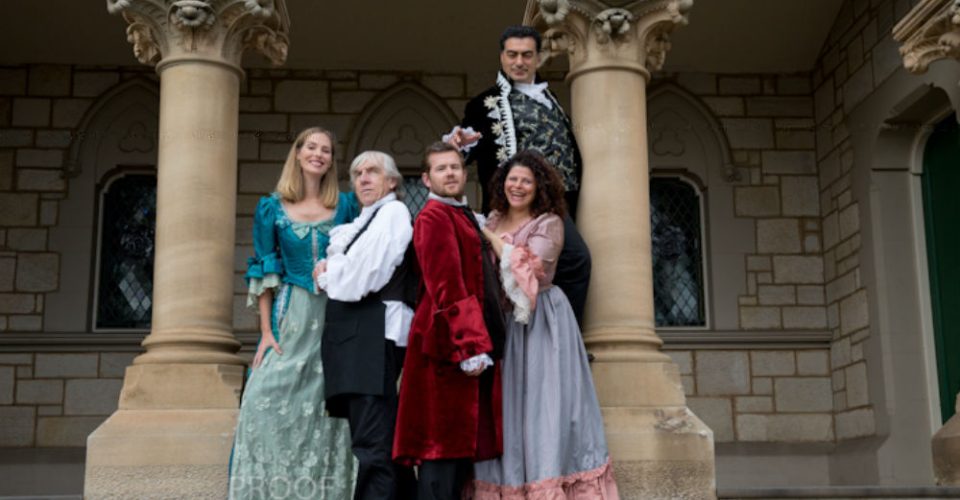 Presented by the Southern Theatre and Arts Supporters (STARS), The Da Ponte Project: Making Mozart combines songs from three famous Mozart Operas; The Marriage of Figaro, Don Giovanni and Cosi Fan Tutte. The songs are linked together by the dialogue between composer Wolfgang Mozart and the Venetian opera librettist and poet Lorenzo Da Ponte. Opera critic and broadcaster Ewart Shaw, who wrote the additional dialogue and portrays the character of Lorenzo Da Ponte, is at the Radio Adelaide studios when The Clothesline calls to speak with him.

Making Mozart made its debut at the Opera Studios at Netley in October 2013. What are some of the reasons for bringing it back?

“Well, I could be vulgar and say they offered us lots of money”, he jokes. “But no, what actually happened was when we created the show, the three singers, each with international experience, wanted to perform; singers want to sing, actors want to act, dancers want to dance and opera singers want to do all three at the same time. This show was a device for the first performance in the hope that we would be able to encourage other organisations – town halls, community arts groups, theatres – to essentially buy the show. We’re so happy to have the chance to be doing it again.”

So, the Southern Theatre and Arts Supporters were keen to get the show down south?

“Yes, STARS have been in action for many years,” Shaw replies. “And they’re a brilliant volunteer community group. They support arts exhibitions, theatre and music in the extended part of the southern Adelaide region. Every year they have one big event and this year it’s us, which we’re really pleased about. Several members of STARS saw the show at the premiere last year and were very impressed by it and thought that it would be the ideal show to take to their members.”

Tell us about your very talented cast.

“Soprano Gisele Blanchard and mezzo soprano Catriona Barr were both students at the conservatorium in the ‘70s and ‘80s. I knew them back then and have even reviewed their first performances!” Shaw explains. “When Blanchard came back from Europe a few years ago she brought her husband, Mario Bellanova, with her; he’s a great singer with a long career in Europe. I think they met in France where they were working for the same company.

“Bellanova has played principal roles in casts headed by some of the world’s great singers and performed at the best opera companies and opera houses around the world,” he adds. “Barr recently sang at the Scottish opera and Blanchard has sung all around Australia and Europe. Each of them is highly experienced singers; they know their Mozart! Our pianist, Jamie Cock has studied overseas and is very much in demand as a solo performer and accompanist, so the music in this show is world class.”

You play the role of Da Ponte. Is there anything in particular that interests you about the character?

“A couple of years ago I compared a concert for Mario Bellanova. It was after that he suggested we do a show together about Mozart’s music and three of his operas: The Marriage of Figaro, Don Giovanni and Cosi Fan Tutte,” Shaw recalls. “We didn’t want it to be just a conference, so I looked at the three operas and looked at what they had in common. There were lots of plot devices and at any one point in any of the operas; two of the people on stage are disguised as other people. There are all sorts of things happening at night and there are lots of occasions of mistaken identity. What I also realised is that all three operas have Lorenzo Da Ponte in common.

“I knew a bit about him, I knew he was Venetian, that he’d been born a Jew, but had converted to Catholicism. I also knew that he’d ended up living in New York as a Professor of Language and Culture at an AmericanUniversity. This was back in the early 1800s so I went looking to find out more about him and he was remarkable. He was evidently very bright, he was very good with languages and he made a living as a sort of Italian rap artist with this game they played where someone would start a rhyme and someone would have to cap it. He made quite good money and he got very well fed doing it.

“He then made his way to Vienna,” he continues, “which was then the cultural capital of Europe and basically talked his way into a series of jobs in the opera house and eventually became a poet and liberalist for all the big composers in Vienna. It was there he met Mozart and that was it. If he was remembered for anything, it was those three operas. The stories themselves are works of genius and the other thing is, they were subversive, and they questioned society’s roles. They questioned the whole nature of female sexuality and they questioned the power of the aristocracy to abuse their servants sexually and socially. The Marriage of Figaro was banned in France because it showed the servants taking their revenge on their masters. In doing these operas, Mozart was really risking his reputation. Da Ponte persuaded him to do it.”

Shaw mentions how happy he is to be performing at the McLaren Vale Institute and shares his wish list for other venues in the future for the easily portable show.

“I can think of three or four places in SA, both in the city suburbs and in regional SA, where we would just love to do this performance,” he enthuses. “Somewhere like MurrayBridge and the Town Hall or Elder Hall in the city. I think it would go down very well in Noarlunga and beautifully in Port Augusta and Port Pirie; we’d very happy to do it.”

Is there a dream venue for it?

“It would be one with a good stage, good lighting, a big audience and a good acoustic. We can virtually do this show anywhere.”

Is there anything else you would like to tell us about the show?

“For people who are a little scared of opera, this is a perfect introduction for them,” Shaw suggests. “You get to hear many of the greatest tunes, the best duets and trios. People would have heard of a lot of these songs before and perhaps didn’t know it was Mozart. But you get the stories in context and you get a sense of why they were written and the people they are written for.

“You’ll also learn what Mozart was like as a composer and a really good sense of what Lorenzo Da Ponte was like as a really brilliant writer of opera,” he concludes. “Well, that’s my view and that’s why I wrote the part for myself.”

The Da Ponte Project: Making Mozart performs at McLaren Vale Institute from 7.30pm on Sat May 24. Bookings at starswillunga@hotmail.com.