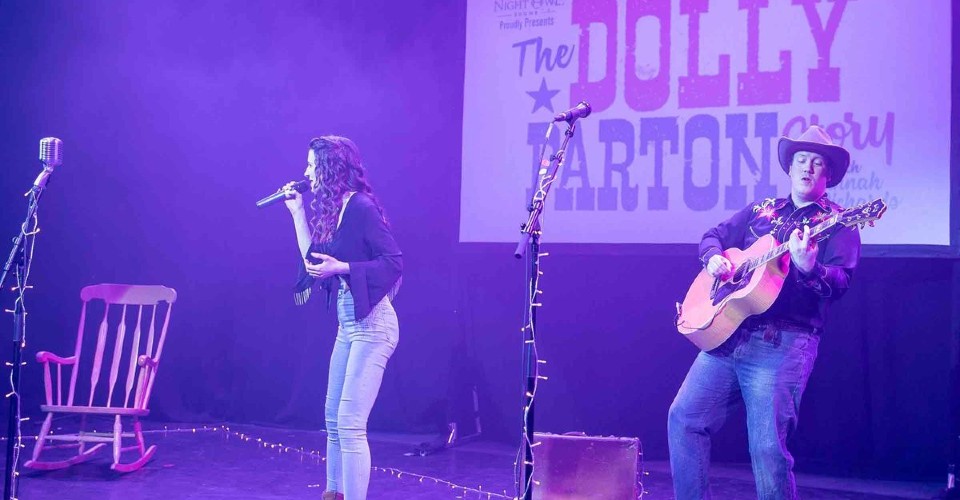 The Dolly Parton Story is one of the Night Owl group of shows presenting the music of a legendary performer. In this case Hannah Richards and Alex Beharrel share the limelight to deliver the songs of Dolly Parton. The Clothesline speaks with Hannah and asks her to tell us a bit about the show and herself.

“We are performing some of the music of Dolly Parton, while telling stories and facts about her incredible life,” she begins. “It’s very much our own interpretation; there are a lot of tributes that almost create a caricature, but we want to focus more on the music and bringing it back to the heart of it. So, there are no wigs or costumes, just two passionate performers sharing their love for Dolly and her music!”

Dolly Parton has written so many amazing songs, if you could have written one of them (or two, or more) which one would it be and why?

“That’s a really tough question… I think the raw emotion of I Will Always Love You is astounding,” Hannah says, “and why that song captures the emotions of so many people. I also love Better Get To Living because I find it amazing that Dolly can joke about herself within a beautifully uplifting song!

Have you learned any not well-known stories or facts about Dolly Parton during your research for the show?

“When Dolly was a young girl she performed on The Cas Walker Show, and he would often include strange challenges for audience members to do. Once he covered a pole in lard and challenged people to climb it where they would receive a prize. Dolly, being Dolly, went outside and covered herself in dirt so she could get better grip – she climbed to the top of the pole and won the prize!”

If Dolly Parton is the Queen Of Country, who, in your opinion, is the Princess?

“I think currently, Carrie Underwood or Kacey Musgraves. There have been so many incredible female country artists over the years but these two have both taken country and created their own, modern version of it, combining this with classic country sounds as well.”

Where do you perform outside of this show and how would you describe your own style of music?

“I trained in musical theatre at University, have trained as a classical singer, and I’m also a songwriter myself so I perform a big mixture of stuff,” Hannah says. “As a songwriter I am hugely influenced by country, and also some folk, blues and pop. I will, however, always love singing along to Les Misérables or almost any Disney film!

“Alex has been performing and writing songs for years and flicks between country-folk influences, and more rocky sounds. It all depends on how he’s feeling!”

What are you looking forward to most about coming to the Adelaide Fringe 2020?

“I have never been to Australia before so I feel hugely honoured and excited to be coming out and getting to perform,” she says. “I’m so excited to see some new places, and also experience Australian audiences – I hear they’re very fun!”

“If you’re up for singing along and having a dance to some beautiful country songs, then come on down and join us!

“Alex and I will also be performing in The Nashville Story, where we sing some of our favourite songs and tell some amazing stories that come from Nashville, USA. I feel very lucky to get to perform some amazing music, with some incredible musicians, and am forever grateful. I’m looking forward to getting stuck in now!

“I would be cookie dough, and Alex would be strawberry,” Hannah says. “We often argue with each other which out of these two is the best flavour…obviously it is cookie dough [laughs].”