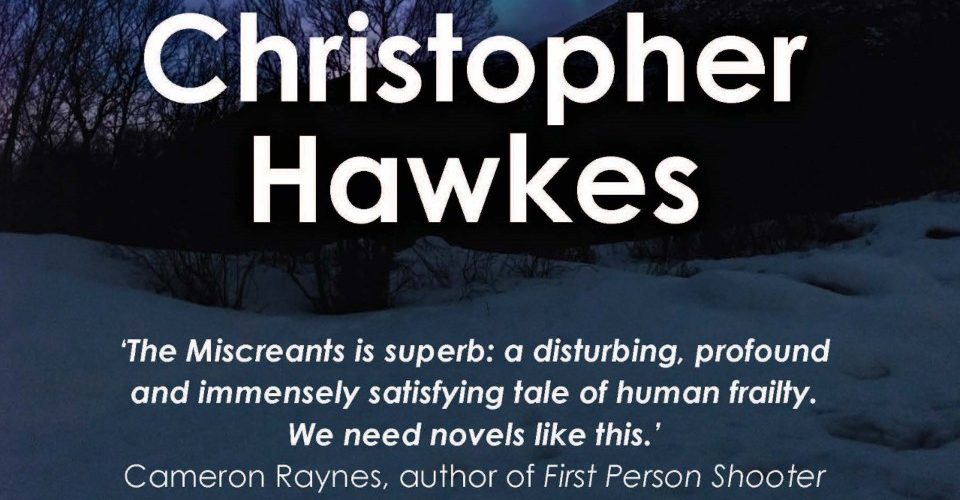 With his debut novel, The Miscreants, Christopher Hawkes follows two brothers into a precarious adulthood that is charged with wreckage, risk and volatility. Hawkes has said that, for him, The Miscreants is about ‘a longing for community, acceptance, love, sex, transcendence.’ He launched The Miscreants on the cusp of Melbourne’s recent lockdown, and we talked to him about his debut novel and the inspiration for the ideas in the story.

We speak with Christopher Hawkes, via email, and begin by asking him to tell us about The Miscreants and how would he describe it to someone who hasn’t read it yet?

“At heart it’s about two brothers who witness the suicide of their mother as children. We join them again in early adulthood when Ethan – seemingly the less volatile and more capable of the two – has gone missing, and his younger brother – who’s got problems of his own that he’s trying to escape from – follows him north into Scandinavia where he has become a member of a doomsday cult. It’s about sibling bonds and adult rivalries, the orbit of trauma, but mostly about human frailty and longing.”

Where did the idea for the story come from?

“Three main sources. First was the death of my aunt (the wife of my mother’s twin) who lost her life to mental illness when I was teenager and my cousin witnessed it. My family left London when I was a baby and I only met my aunt and uncle a handful of times in their lifetimes so I can’t claim the novel as an exploration of personal tragedy, but it did make me wonder how my brothers and I would have been changed by such an event.

“Second was my year as an exchange student in Sweden. I was 22 years old, newly separated from my first girlfriend, and the idea seemed romantic at the time. With hindsight, however, I see it as a masochistic attempt to deepen myself into a writer. There was very little class time and I was too depressed to work on campus so I studied from home, and as the days shortened I became increasingly depressed and vitamin D-deficient. I could not keep my eyes open and was sleeping over twelve hours a night with naps in between. My dreams became more vivid than waking life, and my existence one of anxious unreality, punctuated by periods of manic travel on student loans I would never repay. This became the basis of Harry’s reckless and fugue-like journey north.

“Third was the experience of having stuttered since I was a child, a disability Ethan shares. I wanted to write from the perspective of someone similarly afflicted but doubly estranged by his childhood. He’s the worst version of myself.”

The story is set in the UK, Canada, Norway and Sweden and you have described these places in great depth. The locations are so alive they feel like characters in the story, and they add to the mood of the story. How did you achieve this?

“It sounds misanthropic but I generally have a stronger relationship with places than people, and remember locations I’ve lived in or visited more vividly than names and faces. In writing the novel, I envisioned myself as a camera perched on Ethan or Harry’s shoulder, one moment looking outwards with them, the next peeking inside their heads to see what they were feeling. I like that kind of toggle approach but you’ve got to be very concrete in terms of place for it to work, so what I didn’t remember or hadn’t directly experienced I researched quite intensely.

“There’s a boat scene mid-point in the novel for which I spent days at the State Library looking at arcane nautical maps and journal articles on the cyclonic currents of Vestfjorden in the far north of Norway, and then hired a little diesel outboard from Bluey’s Boat Hire in Mordialloc before writing. The librarians were irritated by my questions but Bluey was very helpful and a legend in other regards: he’d recently rescued a workman trapped underwater by blowing air into his mouth through a vacuum hose until help arrived. My next book was going to be about a superhero who repurposes whitegoods but I didn’t want to give his secret identity away.” 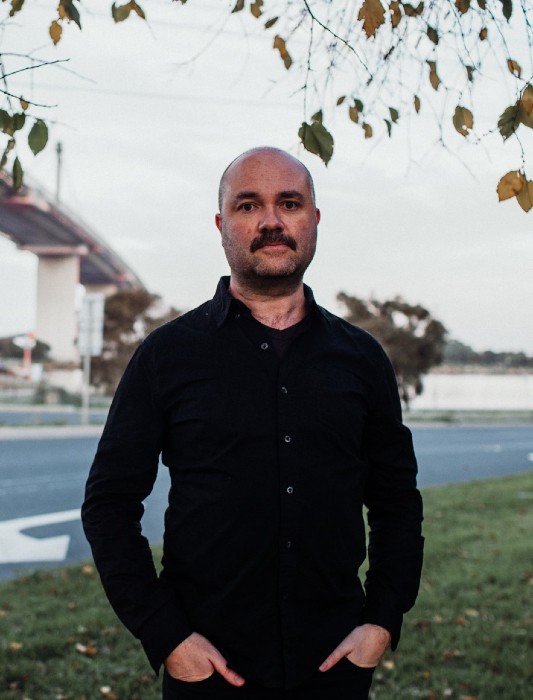 Ethan is obsessed with a doomsday cult and tries to recreate a society of the chosen in a small Norwegian town on the Lofoten Islands. The cracks in the group start to show pretty quickly and it’s clear the members are all drawn to it for different reasons. Why were you interested in writing about doomsday cults?

“For so many reasons! As a reluctant atheist, I find religion fascinating in general. I think that most humans have a god-shaped hole inside of them, and all religion seems to me an attempt to fill that with a supernatural and beneficent presence. All religions start as cults – a small following based around a charismatic leader – and the great majority of these fail, and often because they implode before they can gain mainstream acceptability.

“World-rejecting religious movements are particularly fascinating and prone to this because they’re closed communities straddling the line of family and society, so there’s all these weird, incestuous power dynamics operating. And then there’s the sheer craziness of some beliefs.

“I was in Scotland in 1997 when the Hale–Bopp comet passed. I was pretty spaced out in those days, highlighting passages of The Book Of Buddha between bucket bongs. But was I going to throw myself off the nearest broch if a voluntarily castrated jailbird told me that there was a spacecraft hiding behind it that would take me to a different plane of existence? No, sir.”

Harry and his brother Ethan make some terrible decisions and do things that range from garden variety bad choices to truly unforgivable acts. Is it fun to explore characters doing questionable, illegal and immoral things, things that most of us would never contemplate in real life? How do you decide how far you can push your characters?

“I guess it comes down to how far you want to go as a writer and how awful a character can be before the reader taps out. Regarding the former, it was fun writing Ethan but his headspace was a nasty place to live and I suffered significantly from it. That’s the only way I know how to write, though.

“As for the reader, I’m appealing to an audience who enjoys the moral complexities of identifying with the bad guy, which is much wider than most people will own up to. Humans are a murderous species, and a functioning society provides means of draining away these impulses for the greater good. And violence in art can offer great release. My Nan was one of the most caring and charitable people I’ve met but her bedside table was a bloodbath of crime fiction.”

You developed a Spotify playlist for The Miscreants. It features artists such as George Harrison, Nick Cave, Radiohead, The Stranglers, David Bowie and U2. Was this the music you listened to while writing, or is it the music you recommend readers to listen to while they read The Miscreants?

“A bit of both. The book took so long to write that I used certain songs as touchstones which I’d listen to on loop while writing. My playlist for the first half ran Don’t Bring Harry (The Stranglers), Whitetail (Low), Pyramid Song (Radiohead), Subterraneans (Bowie), For Whom The Bell Tolls (Baker, Steve & Carmen Daye), and Shots and Ladders (Low). They’re some of my favourite songs but aren’t going to fill the dance  floor.

“The Spotify playlist is less intense and matches the narrative of the book. And there’s some amazing songs on there, too. I Am A Supercargo (The Drones), Abattoir Blues (Cave) and The Hungry Saw (Tindersticks) are bangers, and High On A Rocky Ledge by Moondog (the blind Viking busker of New York) is one of the most beautiful songs I’ve ever heard.”

Some artists have found the pandemic has given them a new energy – and new material – for their art. Others have found it difficult to create. You’ve been living in Melbourne through all the lockdowns. How has COVID-19 impacted your creative process?

“I pushed hard on my second book during lockdown to help give the discomfort some meaning, but overall it’s just been horrible. The upside of being an artist is that all adversity is grist for the mill, but fuck the grist and fuck the mill and fuck my creative process. It’s not important right now.”

Do you have a favourite book/author? What is it, and why is it your favourite?

“Albert Camus, J.G. Ballard, Daphne du Maurier, Clive Barker, P.D. James, George Orwell, Raymond Carver and recently George Simenon are writers I can read anything by because I just love their voices. Other writers have single books I fixate on: Frankenstein by Mary Shelley, Riddley Walker by Russel Hoban, Remainder by Tom McCarthy, Steppenwolf by Hermann Hesse, Neuromancer by William Gibson, Mickelson’s Ghosts by John Gardner, The Day of the Triffids by John Wyndham, Perfume by Patrick Suskind, and Hunger by Knut Hamsun are a few, but if I had to absolutely pick a favourite it would be a toss up between Rebecca by du Maurier and The Drowned World by Ballard, the former because of the dream-like intonation (which has influenced me ridiculously) and the latter because of it’s incredible evocation of a post-apocalyptic flooded (and incredibly hot) London.

“Honestly, though, I’m not reading much at the moment. I don’t know if because I’m stewing on my next book or if I’m just exhausted. Instead, I’m enjoying watching movies with my wife, playing video games with my son, and knocking around the seedier corners of Footscray. My next book is based here so I’m telling anyone who catches me that it’s research.”

The Miscreants is available from all good bookshops, and online via glimmerpress.com.au. Click HERE to purchase your copy.