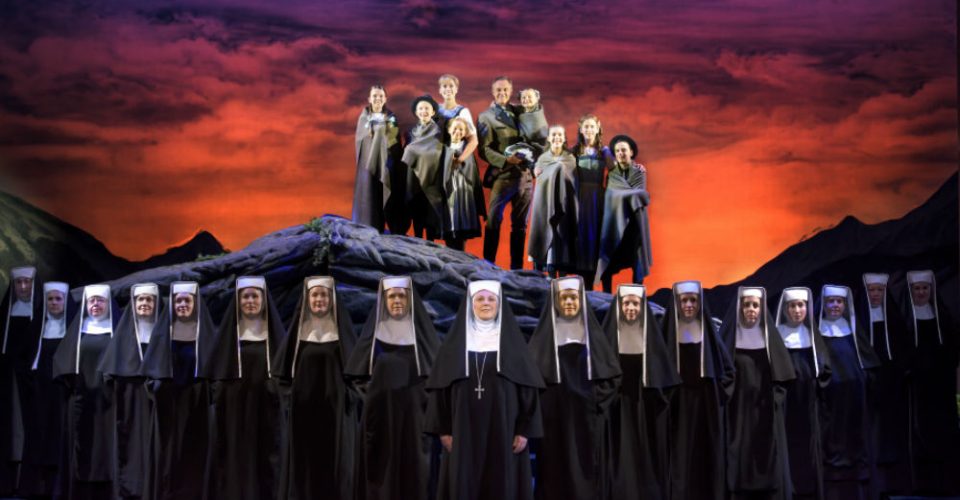 Inspired by the actual von Trapp family and starring Julie Andrews and Christopher Plummer, The Sound Of Music movie is the timeless and endearing story of the widowed Captain von Trapp and his seven children and the fun-loving governess who changes their lives forever. 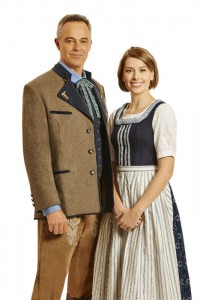 We speak with Amy in the final week of their Melbourne season before the cast head to Adelaide, who suggests that audiences have loved the production.

“It’s a beautiful show; a timeless story with amazing music, and great for people of all ages. It has an appeal across the board so it’s really lovely to be in something that’s so beloved.”

Not only was it a part of so many childhoods, but The Sound Of Music was the first movie that my grandmother ever saw at the cinema.

“My Croatian grandmother and father emigrated from Austria via Croatia, and she had a similar experience when she moved to Australia,” Amy says. “They had been here for some years and rarely treated themselves to the movies, but she always spoke very fondly of seeing The Sound Of Music. They had lived there and knew the landscape, so it was quite a beautiful experience for her to be taken back through the film. She loved the music as well, so it had everything really.”

Amy performs the iconic role of the governess Maria.

“It’s iconic because it’s a great role, and the great thing about great roles is that there’s so much in them to glean and vest in, which has been the joy of it really,” she says. “Maria is this full-blooded, wonderful young character who has so much life and joy in her, so there’s an endless stream to delve into, so long as I’ve got enough energy [laughs]. But that’s been the wonderful thing in that it keeps giving. Working with children as well means that, as a role, it has dynamics that you can predict and some that you can’t, so it’s a gift that there’s always an element of spontaneity and the unknown – which is very Maria. 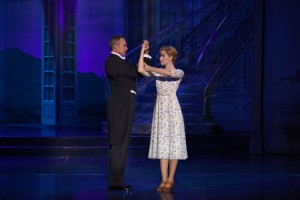 “As iconic as everyone sees the role, the reason is because there is so much to the characters themselves, so it does make it a really enjoyable experience. As a performer, I love unpacking all of that stuff. It’s been a joy and I find something new all the time which has been really rewarding.”

How fun it must be to move between emotionally shy and nervous to feisty and brave.

“Absolutely! Maria gets the full gamut of experience,” Amy agrees. “How Do You Solve A Problem Like Maria? is a beautiful song that really tells you a lot about the character before you even get to know her. Through the eyes of those who really know her the best, you get the great detail of her little inadequacies and idiosyncrasies, as well as her warmth and her humour. The song gives a full picture of this young woman and then I get to come one stage and unleash it.

“The thing I love about Maria is that she is an improviser; she gets thrust in to these situations and she goes for it head first and really dives in and thinks of the consequences later – which is a really fun thing to play a well.

“Last night, I was thinking to myself that I have a fairly expressive face, which is good sometimes [chuckles], but as I walked offstage I realised that Maria is the kind of person who wouldn’t think to hide her emotions,” she adds. “She would have everything read on her face without a filter. So, if you’ve upset her, she’s not going to hide that, she’s going to just be all-out all of the time. It’s a kind of lovely thing that not all of us, in our everyday life, get to be that free.” 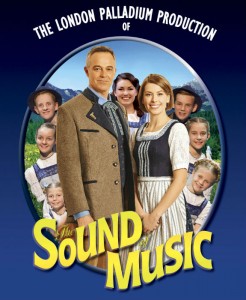 It’s such a complete honesty, isn’t it?

“Yes! Maria is naïve. She doesn’t know the world well, but she does have a lot of love and lot of fervour, and that can come out in strange wonderful ways [laughs].”

Cameron Daddo suggests that his favourite part of the movie is when The Captain hears his children sing for the first time because everything changes for him in that instant. It’s a real goose bumps moment. What would you say your favourite part is?

“As a kid I watch the film a lot and it was always about the song Do-Re-Mi and dancing through the city, the sites and the gardens,” Amy says. “I always thought that it would be the most fun day I could ever possibly imagine. So – from that filmic perspective – can’t ever shake those images of wanting to have that fresh air and singing songs. That part for me has always resonated because I guess I have a very child-like view of the film.

“The musical is slightly different from the movie, just in terms of some things being in different spots, even though the story remains the same, but the musical came first and the movie displaced a few things and the musical has since adapted to that in some ways. I have a lot of favourite moments, but I really like doing the beautiful Abbey scenes with the Mother Abbess. We’ve been running for over 200 performances so I have to be open to look at each performance in a new way and enjoy the freedom in each individual moment. I love starting the show singing The Sound Of Music. I imagine being on the hill, enjoying the solitude… it’s quite meditative, in a strange way.”

How different is the musical to the film?

“There are a few logistical things, like no mountains,” she jests, “but there are also a few extra songs in the musical that The Baroness and Uncle Max sing. And some songs are in different places. We want audiences to come with an open mind and know that we’re not doing a version of the movie on stage; it’s its own entity, and if you get on board with that early, you can have a really good time. You can watch the film at any time, but it’s nice to just listen, to hear the story told fresh and to fall in love with it that way.” 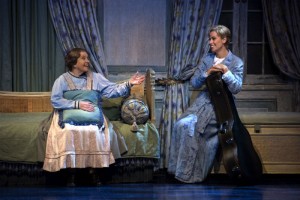 How great that people are taking children and grandchildren along to a show that they, themselves, loved as children.

“It’s gorgeous,” Amy agrees. “And the thing is that it holds up, which is wonderful. The themes in it are still so pertinent today. There’s so much heart in it and it just comes through in every performance. People are genuinely moved. The music deserves to be as famous as it is because it’s incredibly good writing and it just soars. It’s a lovely thing for a family to share in, and there’s always that nostalgia twinged in there, which is a nice thing too.

“Throughout the show, connections are being made between The Captain and the children as they all repair their relationships and get to know each other again,” she adds. “It’s a wonderful thing to see that played out.”

We talk a little about the other cast members, including the amazing Lorraine Bayly.

“Lorraine is tremendous as Frau Schmidt,” Amy says. “She’s the spirit and heart of the show, with plenty of wonderful advice and many marvellous stories. And she’s so youthful; at 79, Lorraine is the youngest one of all of us [laughs]. She’s tremendous and just always knows when to say something to pick you up. I love working with her.” 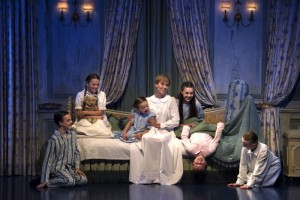 All of the children performing in this Adelaide season of The Sound Of Music are locals.

“We have locals in every city,” Amy explains. “We rehearse with them and get them into the show, which is always a bit daunting for us, but it’s such a rewarding process watching the show happen through their eyes and seeing them discover it. I’ve met all of the Adelaide kids so I’m excited about getting to know and work with them all. Forming bonds with all the kids is really my favourite thing of doing the show.”

It would be fun to improvise around any forgotten lines or mistakes.

“Oh, they don’t forget anything, I can tell you. They’re more reliable than the adults!” she laughs. “They’re pretty great. The way that they rehearse and take it all on is so admirable; it’s wonderful to watch how much they learn and adapt in such a short space of time.”

The Sound Of Music performs at Festival Theatre, Adelaide Festival Centre, at various times, on Tue 9 Aug until Sun 4 Sep.

All images courtesy of James Morgan*