THE TRIVIA NIGHT by Ali Lowe: Swinging Through The Questions ~ Book Review 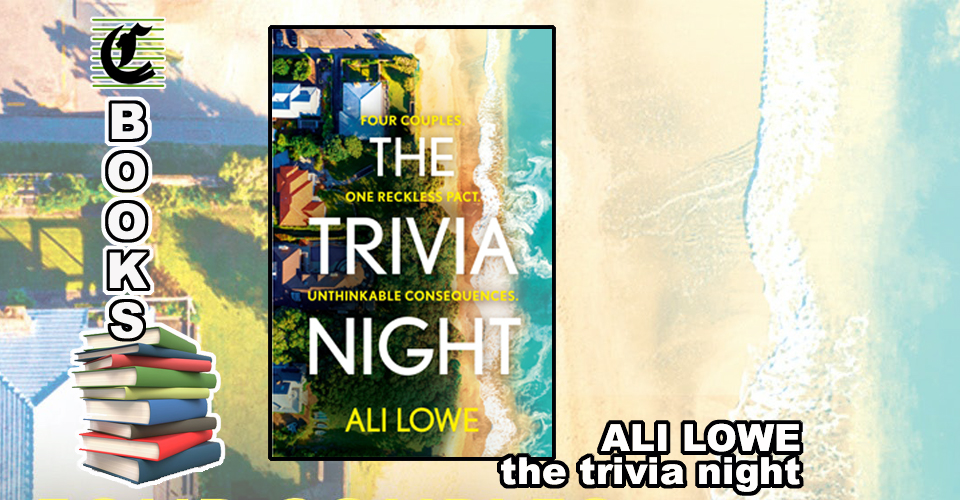 Former London journalist and now Sydneysider Lowe’s first novel is a sometimes bitingly funny character piece, hinging upon a major event that can’t really be described without giving the game away.

A tiny bit overwritten, here and there, but full of snarky, nasty wit, this switches perspectives between a host of Sydney-dwelling characters in the build-up to the Trivia Night of the title, and then the many repercussions: at times they’re talking in the present tense about what’s happening right at that moment, and in the next someone else is discussing differing details with their psychologist months later. It’s a deliberately jarring storytelling device but, in Lowe’s hands, it works well.

In the posh suburb of Darley Heights, eight neighbours and friends eventually gather for the local school’s fancy-dress Trivia Night and disco, and all of them have had one too many: there’s ostensible protagonist Amanda Blackland and her husband Ted; Alice Daniels and hubby Pete; Zoe Makin and spouse Miles; and the much-lusted-after, free-and-easy Hampsons, Lara and Luke. There’s plenty of humour and suspense as we build (and build) up to what exactly is going to happen, and then, when it eventually does, you might, at first think it’s, ahem, a touch trivial. But Lowe proceeds to tease out some scary surprises and plot turnarounds, and the result is often as nerve-jangling as any full-blooded murder mystery.

And who knew that rich Sydney types behaved in such a sordid fashion? I mean really…