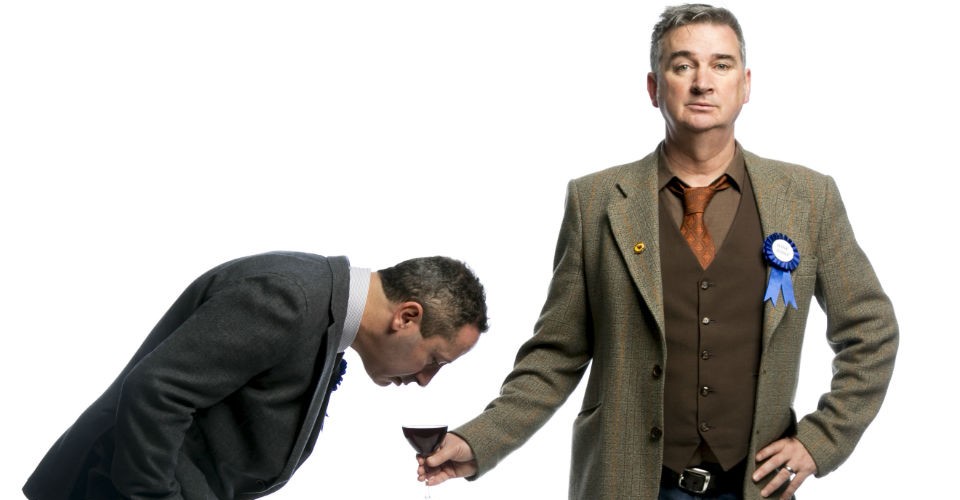 Comedians Damian Callinan and Paul Calleja have got wine – and those that drink it – all sussed out, and they want to take you on one cellar door tour that you won’t forget. Come prepared to translate the alien language of the wine industry along with a few laughs and walk out with a smile and better understanding of what you are drinking. Find out if you are a wine snob and enjoy the hilarity of the night.

We speak with Damian Callinan, via email, and begin by asking him to tell us how he and Paul came to create The Wine Bluffs.

“Paul was asked to do a one off show at a winery for The Yarra Valley Grape Grazing Festival,” he says.“He decided he didn’t want to do it alone so he looked around a room full of his comedy mates and saw me trying to open bottle of ‘Hill & Grace’ with a plunger and power drill. Paul stopped looking after that.”

How did the concept originate? Was it maybe from opening a bottle with multiple award stickers only to find the wine was awful (An experience many have unfortunately endured!)? 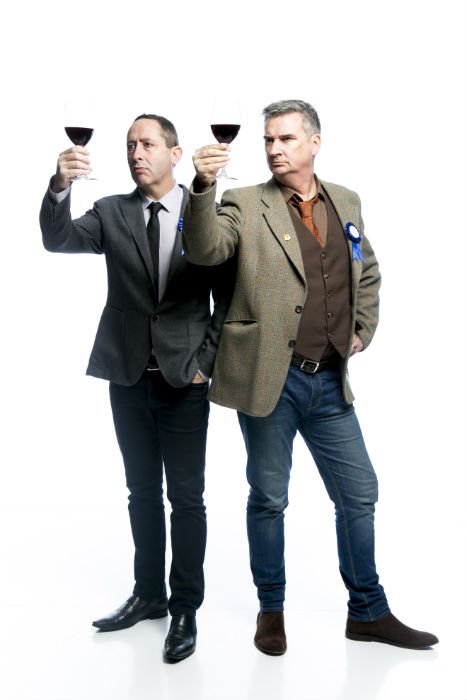 “The original show was performed in a heritage listed woolshed at Madden’s Rise Winery. We did three 20-minute shows across the day,” Damian says. “Such was the response that by the end of the day we had already decided that we should keep doing it. For18 months we kept doing it at corporate events and adding material. Eventually we had an hour long show and we started doing arts festivals and the show really took off. James Halliday [The Wine Companion] gave it 98 points without even seeing it.

“Previous audiences have said things like … ‘I had no idea you could do that with a wine bottle!’ and ‘If that doesn’t come out then you guys are paying for the dry-cleaning’ as well as ‘I previously suspected I may be a wine wanker & now that’s been confirmed’.”

Having performed the show for some time, have you come to dislike wine (and the pretentiousness of those who think they are in the know) or to love and appreciate it even more?

“The more the pretentious the audience the better the show goes, so if you have mate who bangs on about his temperature controlled fridge and going to a Norther Italian Nebbiolo rating, bring him/her along. We spend most of the show taking the wine wankers down and then after the show Paul turns back into one.”

The Wine Bluffs has been seen at the Adelaide and Melbourne Fringes and the Melbourne International Comedy Festival, as well as at cellar doors. Do you find you need to change the show to suit the demographics of the audience?

“We have done the show to everyone from the incredibly wine literate audiences at the Barossa Vintage Festival to cask-swilling bumpkins at The Big Kahuna Festival,” Damian says. “Regardless of the make up of the crowd, the show always seems to work. We interact and improvise a lot so we are always able to gauge very quickly the level of wine knowledge in the room and adapt to that on the fly.”

Have you had any wine ‘experts’ come to you after the show to share their thoughts or opinions?

“We’ve had wine masters, wine critics, sommeliers, vignerons and every possible wine related worker you could care to name. Most of them keep their level of experts quiet but a few have stuck their head above the parapet to give a cheap plug for they business. At the Stirling Fringe Festival we had one wine maker take us back to his cellar door in Hahndorf after the show. We had a full tasting at 1am. It was bloody good too!”

What are your thoughts about buying bottles worth hundreds or even thousands of dollars, such as the Hermitage Grange?

“Our thoughts are that we are happy to share bottles with anyone who has done this!”

Where to after Adelaide Cabaret Festival?

“We have a national tour of The Wine Bluffs happening in 2019, so apart from a few one-offs later in the year, we will be working on other projects for the rest of 2018.

“I have a movie called The Merger coming out in August, which is based on one of my other shows,” Damian says. “I wrote, co-produced and play the lead role of an ex-AFL Fringe player who comes back to coach his former country footy team and recruits refugees to help the club survive. It also stars Kate Mulvany, John Howard, Nick Cody, Fayssal Bazzi & Penny Cook, and has been funded by Screen Australia & Screen NSW.

“Paul will go back to writing for The Project and The Front Bar and will also be soul searching as to why he didn’t get cast in my film.”