Rhonda Burchmore and Trevor Ashley in Twins: Only Their Fairy Godmother Can Tell Them Apart – Adelaide Cabaret Festival Interview 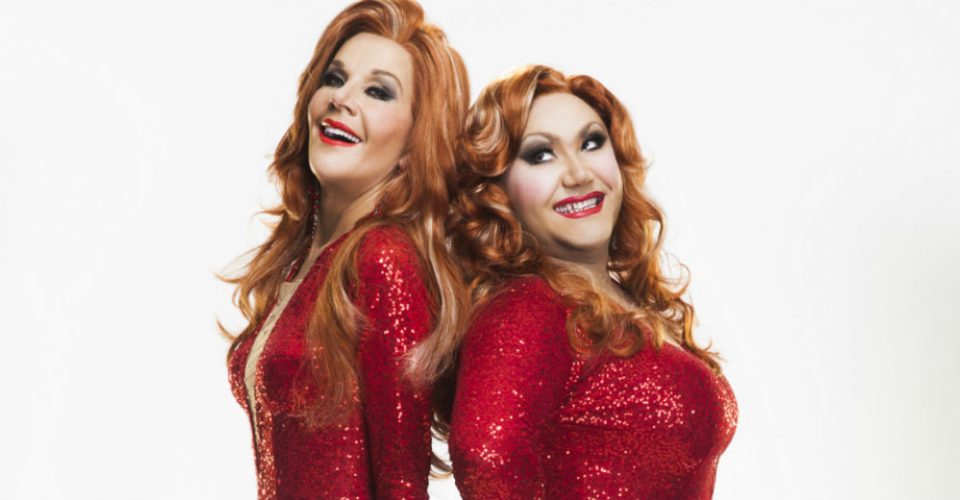 Trevor Ashley and Rhonda Burchmore each have successful histories with the Adelaide Cabaret Festival; Trevor last appeared in 2015 with I’m Every Woman and previously Liza (on an E), a show which has taken him around Australia and the world, including a season on London’s West End, while Rhonda has had more than 30 years in show-business with musical, movie, television and cabaret credits. In 2014 received an OAM for her service to the Arts and was the inaugural recipient of the Adelaide Cabaret Festival ‘Cabaret Icon Award’.

Following together in the Annie parody Little Orphan TrAshley, Adelaide Cabaret Festival, audiences will get twice the glamour and twice the fun when Trevor Ashley and Rhonda Burchmore join forces for present Twins and have brought on board co-writers Phil Scott and Thomas Jaspers, Director and Choreographer Cameron Mitchell and Musical Director James Simpson.

The Clothesline speaks on the phone with Rhonda Burchmore while she enjoys the Gold Coast beaches.

“It’s a beautiful 24 degrees in the water,” she begins. “I had a gig up here last night and thought I have to make the most of this weather as I will be on a plane this afternoon to London.”

How did Twins come to fruition?

“Trevor Ashley and I have always had a mutual admiration for each other and we just hit it off while we were doing Little Orphan TrAshley. We were doing a benefit and [legendary actor] Geoffrey Rush was there; it was his suggestion that we do a show together. We thought, ‘What is crazier than doing Twins!?’ But, we are not tame with what we do. We go to the extremes. It will be the silliest thing in the Festival and with so much glamour.”

The pair is reinventing the likes of Sonny & Cher, Judy and Liza, Kermit and Miss Piggy. Rhonda informs us that Ellen DeGeneres and Portia de Rossi, the Kardashians, Adele and Sia also feature in the show.

“It’s very contemporary and very silly with lots of parodies,” she says. “Chandelier by Sia is a real highlight; I’m Sia and Trevor is the dancer from the music video in the flesh leotard. He looks like a giant bluebottle jellyfish. It’s hysterical! I have to sing and try so hard not to laugh at him dancing.

“We also have a big band supporting us – handpicked by Trevor. They’re called The Twinks, and look like their average age is 12,” Rhonda jokes. “They will be the only all-male big band dressed in little white shorts and sequined tops at the Cabaret Festival.”

You’ve just finished a season of Twins at the Melbourne International Comedy Festival. How did that go?

“It was great!” Rhonda says. “Obviously it’s always hard to start a brand new show and the comedy festival is a strange beast to perform cabaret in too. It’s a hard show to break when you have so many blokey-blokes doing stand-up comedy. We were much more of a sketch show, like a contemporary Saturday Night Live. It was good to try-out there, but I think it will be much better as part of a Cabaret Festival, so we are looking forward to going gangbusters with it in Adelaide. People in Adelaide have always supported my shows and I know they love Trevor so we are in for a good little season.

“I did a show in Adelaide two years ago called Vinyl Viagra, which sold out,” she continues. “That show was the release of the new Rhonda Burchmore that was very different to the Rhonda people see on Carols By Candlelight each year. Trevor is very much responsible for bringing that crazier side out. For a while I thought maybe I might lose some of my fans, but it seems like I have really brought them with me. Even the older generation love it and leave with a smile. I might shock them a bit, but they love it! I have also picked up a lot of younger fans and of course so many gay men, who I just adore.”

Your drag impersonator, Thomas Jaspers (a.k.a. Rhonda Butchmore) is part of the writing team for the show. What is it like having a drag queen impersonate you?

“Thomas is just such a nice guy and it comes from a good place. Initially when he started all my friends like Anthony Callea, Tim O’Connor and Lisa McCune were going what is this guy doing? He was originally using my image and my friends thought there must be something wrong with me. When I met with him he explained how much of a massive fan he has been since a little boy. So, I though, if you can’t beat him, join him. He is absolutely hilarious and it is quite flattering that he does it.”

You mentioned that you are about to travel to London.

“Yes – it’s going to be part work and part play,” Rhonda says. “But after that I am singing in the Barossa Valley with the Tanunda Town Band at the end of May, which I’m really looking forward to.”

“Adelaide Cabaret Festival is such a fabulous festival. The dancers that were there for my last show always ask me when they can go back. The whole thing is run so well,” she says. “I think our show will fit in perfectly for a good old giggle. A stiff drink is recommended. I sometimes can’t believe what I just did when I walk off stage. It’s such fun!”