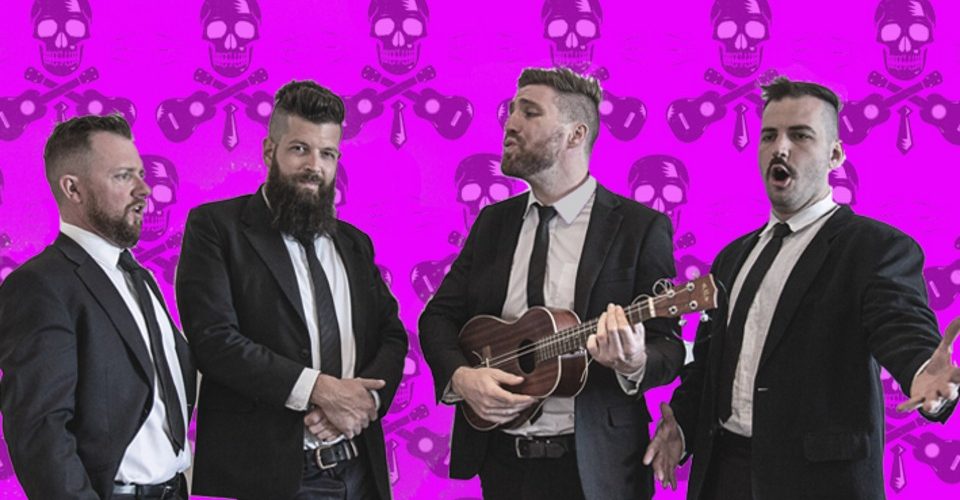 Adelaide’s own Ukulele Death Squad is coming to get you, armed to the hilt with the recorder of stringed instrument world – the not-so-humble ukulele! And even though the word ‘ukulele’ could strike fear into the hearts of men, I recall seeing Ukulele Death Squad’s first ever show and wondered if it would be endless ‘hey nonny nonny’, folky, noodling with music from old people’s homes? Nothing could be further than the truth. Snappily dressed in suit pants, dress shirts, waist coats and ray-bans, they oozed attitude from the moment they stepped on stage. And then they started to play. Holy Guacamole! Such energy, humour, rock‘n’roll ‘tude. Covers and originals – ferocious stuff.

It wasn’t long before they were using the term ‘The Most Dangerous Uke Band In The World’. Extra shows were added before heading to Edinburgh Fringe and sold out on their first trip overseas. Since then there have been sell out seasons here and abroad, they have run their own family friendly Ukulele Death Fest and last year did a whole show of Nick Cave & The Bad Seeds songs that was an absolute belter. This year the full Death Squad are doing a show called The Squad Father and founder member Benjamin Roberts is doing a solo show of Bruce Springsteen tunes.

We speak with Benjamin about UDS’ adventures during this year’s Fringe and we begin by discussing the rise in popularity of the ukulele and whether it could be attributed to artist like like Amanda Palmer or Mumford and Sons and an avalanche of uke covers of everything from punk rock songs to Britney Spears on You Tube.

“I think firstly it became popular with a lot of retirees and older generation people because it’s quite an easy instrument to pick up and start to play,” Benjamin says. “I think a lot of people got into that way and it staggered down the age groups slowly becoming a bit more popular. Then some popular acts started throwing up uke covers of their own songs and a lot of people got interested in the instrument that way. It does seem to be taking over quite a bit now.

“It’s a small instrument but it’s packing quite a punch these days. There are only four strings to worry about and much easier than lugging around a big guitar. And they just ooze fun, ease and comfortability. It’s an instrument, but you don’t have to sit and learn it classically.” 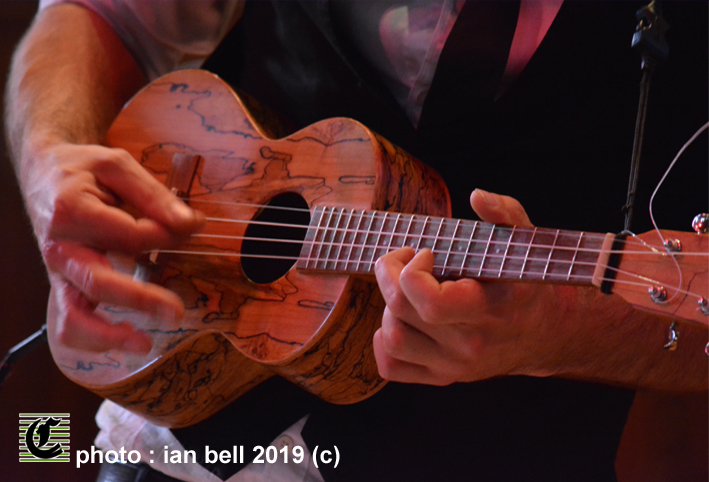 My understanding is that you were not actually a uke player, but you learned to play one in order to teach it to a guitar student.

“That’s right,” he agrees. “He was a new student and I told him to give me a week and I’d see if I play it’. I was one of those anti-uke people for a long time. I guess I thought it was just all ‘You Are My Sunshine’ and all that kind of stereotype stuff. But when I started playing around with it, and there is a high G drone string on it a bit like a banjo, so I could do finger picking rolls on or strum it like a guitar and I could flat pick it like a mandolin. So I could use all the neat tricks I have learnt on all my other instruments all in one little compact instrument that I can pack in my hand luggage and travel all over the world with. It’s ended up being the perfect instrument for me really.”

That student was Bruce Riley, right?

Yes,” Benjamin says, “and the inspiration for The Squad Father show we are doing this Fringe. If it wasn’t for him I would have never picked up the instrument. I would have never dived into it and discovered its unique powers. After teaching him and discovering I really liked the instrument and started playing it more. Bruce continued lessons, was at every single show of ours, he helped out working the door and appeared in our film clips and things like that. He was a great student and a great supporter of what we were doing and also became a really great friend as well. And when he passed away last year we thought what better way to honour him than to do a big show doing the songs we played together in our classes and songs that just fit the mood. It will be fitting tribute to the guy who inadvertently started it all.”

My efforts of trying to work my way round a ukulele have been hindered by years of rudimentary guitar playing. Is it more like playing a banjo in terms of chord structures and tuning?

“Well the way it’s strung is more similar to a banjo, with the higher strings where the lower strings would be on a guitar. But it’s the same high strings as if you put a capo on the fifth fret, so all the chord shapes are the same as if you have the capo on the fifth fret, then if you play a D shape on a uke, it becomes a G and so forth. Once you unlock that it’s pretty easy, so it’s more like a guitar but the finger picking patterns of a banjo work because of the high G string.”

The other thing that sets UDS apart is the attitude with which you play. Uke’s are kind of folky instruments but you play them with a rock’n’roll vivaciousness and there is a bunch of that in folk tradition, rollicking and jigs and so forth.

“In the past there have been bands like The Pogues who were hammering away at traditional instruments and doing traditional Irish tunes with a punk attitude. I come from a background in heavy metal and punk music as well, so I love putting big energy into songs. They are acoustic instruments the attitude and energy and the way you play can achieve the same effect as having a huge Marshall stack.” 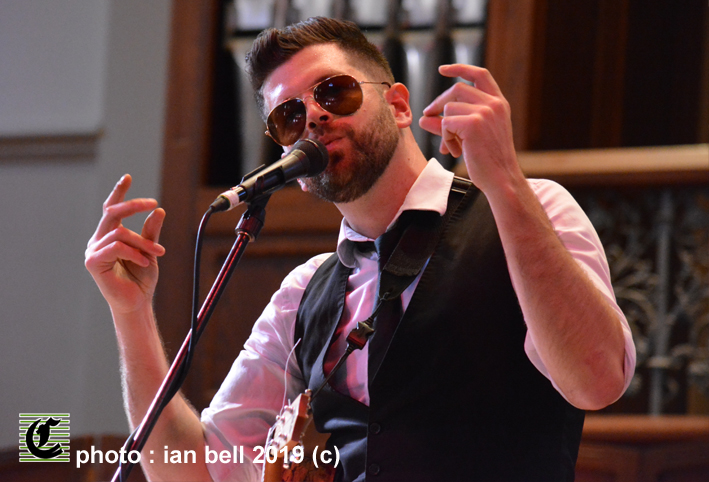 You are also doing a solo show of Bruce Springsteen material this year, and last year UDS did a fantastic show of Nick Cave covers. Are there any artists whose material couldn’t have a uke translation?
“When we did the Nick Cave one,” Benjamin says, “it wasn’t as severe as death threats exactly but a lot of people had their doubts. With artists like Nick Cave and Bruce Springsteen, people hold those artists very close to their hearts and have a close connection to those songs. When we announced the Nick Cave one people were a bit worried about it, but we managed to turn it around. We didn’t want to make it a comedy or anything; we treated it seriously and with respect.”

I think Nick would have loved the Cave show; he would have appreciated both the respect to his material and reinterpretation of your versions.

“This year, due to people’s schedules, I decided to go out on a limb and do my first ever solo Fringe show with an artist who is challenging. Springsteen songs are so lyrical so it’s a great brain training exercise to memorise all the words. It’s been a great challenge as a musician and a songwriter to rearrange these songs so they work with just one uke. When Bruce does these songs he has the might of the E Street Band behind him with horn sections and lots of big electric guitars etc. But stripped back a lot of those songs work quite nicely as well too.

“It’s a bit more seamless going to bringing Springsteen to the Uke than the Nick Cave one,” he says. “They are both heavy lyrically as artists and the melody lines aren’t always repeated the same and sometime the lyrics are almost spoken so there is often not a simple course to follow in the verses.”

For your chance to win a Double Pass to see Ukulele Death Squad on Sat 22 Feb at Grace Emily Hotel, simply click HERE or send an email to theclotheslinemagazine@gmail.com with the header UDS COMP and tell us who the student is that inspired Benjamin to start playing ukulele. Please include a contact phone number.

All details are strictly confidential!

Competition closes at 10am on Thu 20 Feb and the winner will be contacted by phone.

Good luck and be sure to tell your friends.