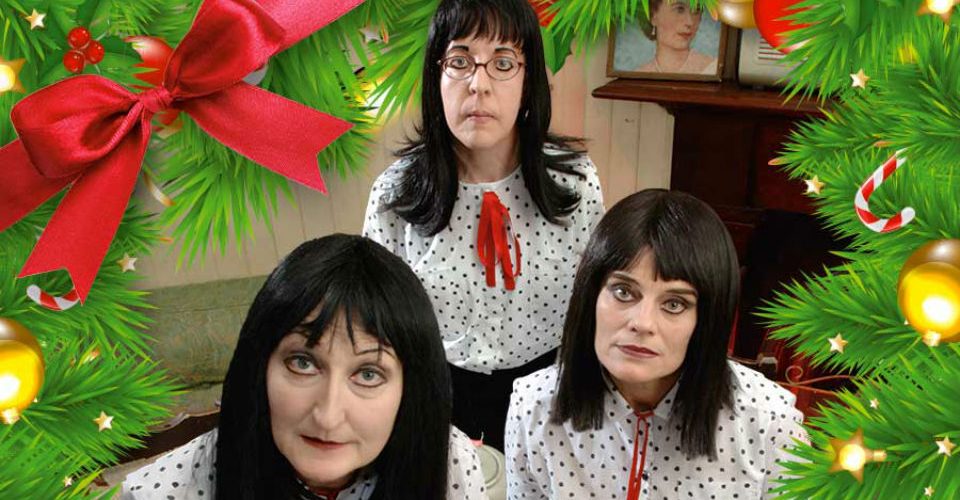 Venturing out from the comfort of their rickety old house in Esk, Queensland, The Kransky Sisters are filling up the Morris with a swag of their most treasured festive season items, their distinctly unusual musical instruments, and enough petrol to get them somewhere and are heading to Adelaide to share their cherished Christmas traditions and gifts with us. This endearing, yet highly dysfunctional trio are laying out the tablecloths to take us to a whole new level of the family get-together.

We speak with Mourne Kransky – eldest sister to Eve and Dawn – and lament how shopping centres put up Christmas decorations so early in November.

“It is quite early,” she agrees, “but everyone gets in early these days for everything. Come January and you’re accidentally tripping over an Easter egg [chuckles]. Better to be early than late, I always say.”

It’s been a while since you have been to Adelaide. Are you all well?

“Yes, yes, we’re all well. Dawn had the chicken pox and was quarantined for a while in the laundry room where she lives, but she’s over it now.”

And the Morris is holding up well?

“It certainly is,” Mourne says. “It’s amazing really, isn’t it? It just goes and goes and goes. We’ve taken it all over the world in the hull of a ship, and we’ve even braved the oncoming traffic over there in Holland – shocking drivers, they are. The only thing we had to do, which we mention in our show, was to fix the fanbelt. The pantyhose fanbelt broke, but we met someone who fixed it for us; a man down in Byron Bay, who became a friend, to used one of his dreadlocks on the fanbelt – it’s still going, you know. It’s certainly an interesting fibre. It’s the oil in the hair that keeps things smooth around the fanbelt.”

Is this the first time that you and your sisters have performed a Christmas tour?

“It’s the first time we’ve toured this show, yes. We did do a little Christmas show last year at QPAC; it sold out three weeks before so a lot of our friends from Esk couldn’t come to see it. We’ve added and changed things a bit and we’ve got it in fine form, so we can bring it around the rest of the country now.

Of course, it won’t be all Christmas songs that this sisterly trio will be offering audiences.

“We do a couple of Christmas numbers in there that you’ll all know – Santa Claus wrote one of them – and we’ve got some brand new songs that we’ve learned especially for the occasion,” Mourne explains. “We’ve got Daft Punk, Lady Gaga, Enya and Sia… there’s one by The Carpenters… and there’s lots more, yes. There’s one by a man who dances like a horse and one that says Hey Ya a lot. We’ve got quite a lot of songs, even one we wrote ourselves, about our mother making us do the chores. It’s a chore song.

“We also have a special segment in our Christmas show called ‘The Honouring Of The Treasured Items’,” she adds. “We always honour our things at Christmas, and we’re bringing them to show you, from Esk. Yes. We’ll be able to show you our precious things. Of course, we’re bringing our chokos to adorn the stage. We always have our Christmas chokos… hang them up, you know, on stage. We hang them up at home as well. But if you hang them too low you get knocked out. They’re quite hard, aren’t they!”

I don’t know, I’ve never had a choko.

“Haven’t you? Boiled chokos are the best,” Mourne says. “Some people put butter and pepper on them, but people used to throw them away in the old days. They were our staple when we were children – chokos for breakfast, lunch and dinner – because we had a choko vine outside; they grow very well, they’re very hardy and we’ve still got the ones hanging up from last Christmas. They’ve not even gone off.

As sisters, you all have very different tastes in things. As a gift for Christmas, what is it that you would most want?

“Ah, well… I’ve always wanted a glomesh purse. Yes, I think that it would enhance my going out look very much. It might take the eye of someone, perhaps a stranger passing by? But, it was also divert from the bad hairstyle, you know.”

“Dawn really likes to play those Pac-Man games on those little things that make noises and do games,” Mourne says. “She likes those, but they’re expensive so we don’t get those for her. Mrs Evermore, perhaps, might get her one; Dawn lives with Mrs Evermore over the back fence, you know, in the laundry there.

“We once saved up a lot of money and spent $50 down at pawn shop to buy Dawn a portable typewriter. But then she told us that she wanted one with a big screen on it and was very disappointed. Very upset we were that she was disappointed in our gift, so we took it back. We didn’t give her anything that Christmas for being such a spoiled sport.”

“Yes. That would be something that she would ask for. But I think Eve would like a pair of shorts.”

“Yes, we had a Swedish backpacker stay at our place,” Mourne recalls. “We’ll tell you in the show, actually. We had an Airbnb experience, and Eve was quite taken with these denim shorts that the Swedish backpacker was wearing. She wants a pair of those, but they’re a bit lude; I’m trying to divert her attention away from that. I mean, once you start wearing shorts, heaven knows where one will start going with the one’s clothing after that.

“It’s always nice to be modest, isn’t it? Modesty creates geniality, doesn’t it, which in turn creates nice manners.

Have you played at the Festival Centre before?

“Ah… yes… I think we have,” she says. “Many years ago we did the opening night for the very first time of our show Three Bags Full. We were very nervous; I remember that, because we had just learned our new songs… I think we made a few mistakes…

Having been spinsters for so long, do you think any of the Kransky sisters will ever marry?

“Well, I should be married first because I’m the one with the glory box, after all. I suppose it’s very difficult because Eve relies on me. I don’t know how she would cope on her own if she ever got married. Eve lives somewhere between yesterday’s lunch and today’s breakfast. She needs help in some ways, getting along with life. And if I got married, I’d have to leave her behind, which makes it a very difficult situation. And Dawn has not got a man and she’s happy; I don’t even speculate on that number.

“I’ve always had a love… since I was young,” Mourne laments, “and it’s very hard for me to get away from that. Glen Davies was a big influence on my life but I never got over him… he married Charmaine Wilkinson.”

Will you be giving out gifts in the show?

“Well, a couple of people will be getting some little treats, but maybe we can make some choko pies to give out after the show at the signings. We might just look into that; a bunch of choko pies wouldn’t go astray, would they?”

“Yes, well, we’ll be sharing our stories about Christmas at home in Esk,” Mourne says, “and we’ll be bringing all of our instruments with us: the cheese grater, the toilet brush will be out again, we got the tuba and the saw, the old ‘50s keyboard and the musical saw will all be featuring, and we’re really looking forward to doing all of our new songs for you. We’re looking forward to sharing our Christmas with the people of Adelaide because we’ve never shared a Christmas with anybody, so it will be a first-off for us, which will be lovely.”

Kransky tea towels will be available after the show for signings, as well as a special edition one for Christmas.