Virginia Macgregor: An Interview With The Author Of What Milo Saw 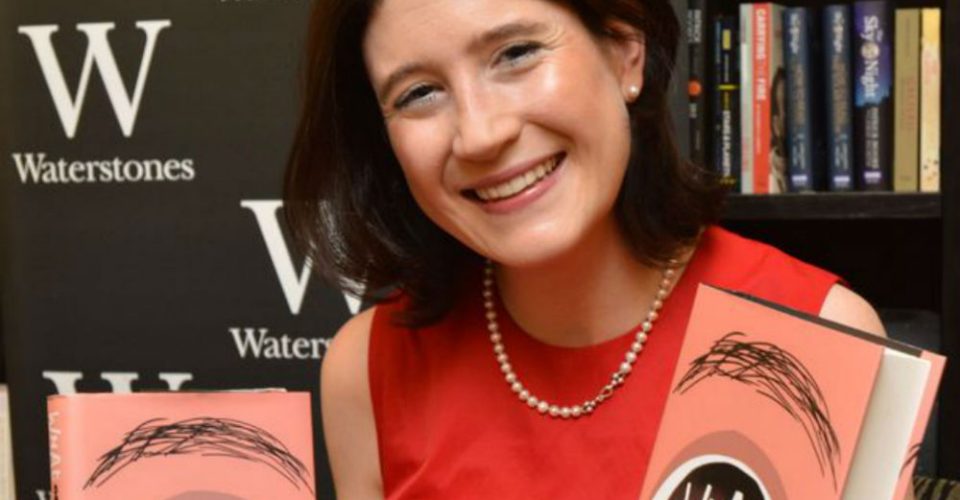 Virginia Macgregor’s debut novel, What Milo Saw is already scaling heights more seasoned writers only dream of. It’s being translated into no fewer than ten – count them, ten – languages and has been listed as one of Ten Books That Should Be Made Into a Film by Novelicious. For a debut novelist, or a novelist of any kind, these are milestones that seem beyond comprehension. This sort of thing happens only on blue moons in December… in a Leap Year.

The Clothesline speaks with Virginia Macgregor and asks how it felt to have something she’d written connect so deeply with so many people all the world over?

“There is no greater gift for a writer than to be read – and to have her characters and her stories loved by strangers,” she replies. “Knowing that a world I created in the quiet of my imagination is coming to life in the minds and hearts of people around the world, feels like a miracle.”

A miracle indeed. Milo has been described as similar to another hugely successful book, The Curious Incident Of The Dog In The Night-Time, also about a child whose differences lead him to see things the adult world chooses to ignore. Do you like the comparison?

“I’m hugely flattered by the comparison,” Macgregor says. “What I love about Mark Haddon’s novel is the voice: he allows us to inhabit the world of a little boy who has a unique perspective on the world. I hope that, through Milo, readers will have an equally powerful – though very different – experience.”

One of the strengths of Milo is absolutely Macgregor’s ability to capture voice. Milo’s voice is authentic, charming and believable, as are the voices of the other characters in the book. Macgregor’s gift is to enter into Milo’s world so deftly. She describes what Milo can see in a way that really rings true for his character, for example when she describes Milo looking at the water: ‘He loved looking into the water in the same way that he loved looking at the sky, because it meant he didn’t need to shift his head – the picture changed on its own.’ We ask Macgregor how she found this voice?

“Ah, that’s the magic that happens when you put together a bit of research, a bit of observation, a bit of imagination and a great deal of love for your character: out comes a little boy like Milo and his unique view of the world,” she suggests. “As I wrote, I had to keep reminding myself to stay in Milo’s world. I did this by asking myself questions: How does this situation look to Milo? How does he feel? What does he miss because of his Retinitis Pigmentosa? What does he misunderstand because he’s a child? What might he understand better because he has Retinitis Pigmentosa and is a child? How does he act on what he sees?

“Entering a character’s consciousness is about forgetting yourself and abandoning yourself to every bit of who they are – from how they brush their teeth, to how they cuddle their pet pig!”

Milo’s degenerative eye condition, Retinitis Pigmentosa, means he will eventually be blind. Why did you choose this particular condition for Milo?

“Going blind is one of my greatest fears,” Macgregor says. “I’m a hugely visual person – and I’m also disparately short-sighted. When I take out my contact lenses, the world is a fuzzy blur. I have a recurring nightmare about driving down the road without contacts or glasses and crashing into everything! So, the issue of sight has a personal dimension.

“When I cast Milo as my protagonist, I knew that he would encounter some painful situations and so I thought that it would be interesting to give him a particular angle through which to see these things – an incomplete vision that the reader would fill in,” she explains. “I spoke to my optician about eye conditions which affect children and she told me about Retinitis Pigmentosa – the debilitating and yet intense experience of seeing through a pin-hole felt right for Milo.

“Finally, I’m a sucker for paradoxes (life, I believe, is defined by paradox): I love the idea that a little boy with an eye condition picks up more than most of the healthy-sighted adults around him.”

One of the great joys of the book is the way Macgregor turns Milo’s disability into a ‘super power’, making it his special skill that allows him to do things – notice things – that fully-sighted people miss. Where did that idea came from? 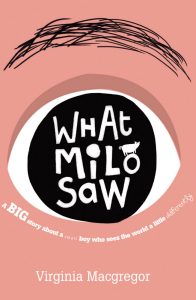 “I love that – I hadn’t thought of it as a ‘super power’!” Macgregor exclaims. “But you’re right. The idea was born out of my experiences as a secondary school teacher. Some of the most extraordinary children I’ve encountered have had some kind of disability: physical, emotional, social. What makes them amazing is their capacity to adapt – and compensate. Physically, Milo can’t see very well, but that just makes him more focused and sensitive and intuitive. It’s also a general truth about human nature that our greatest strengths often come out of our greatest weaknesses.”

Speaking of human weaknesses, Milo is surrounded by adults who constantly let him down – negligent parents, disinterested police, corrupt nursing home staff, a well-intentioned but misguided teacher, even his good friend Tripi disappoints him. As a result, he becomes very self-reliant and brave, breaking and bending rules to do the right thing for vulnerable people. Milo’s determination to right wrongs is juxtaposed with the Syrian crisis and dispossessed refugees. Was this intended to be a message for your readers?

“Children are wonderfully idealistic,” she replies. “They think they can change the world. It’s what we love about them. And it’s something I think we should nurture and encourage rather than undermine by our jaded adult cynicism. Every day, we are bombarded by news reports of horrors happening around the world – and we suffer from that terrible condition: compassion fatigue. And we feel helpless. Fiction – and in this case, little Milo – helps to re-sensitise us, and makes us wonder whether there is perhaps something we can do after all.

“And then there’s the David and Goliath angle too:” Macgregor adds, “a little boy who wins in his battle against a big, horrible institution. We have so much to learn from children, not least the courage and determination with which they fight injustice.”

Milo certainly has a lot to teach us. He is a nurturer; gentle, kind and caring. He begins the story nurturing his beloved Gran, then looking after Tripi, his mother, the other residents of the nursing home, and finally his baby sister Arabella. Was it was important to create a male character with this nature – one far removed from the stereotypes we have of boys and men in our culture?

“I guess I respond to gender a bit like I do to nationality. We shouldn’t be bound by the borders of gender stereotypes anymore than we’re bound by the borders between countries. We’re human beings and we’re all an odd mix of strengths and weaknesses – and those aren’t (or shouldn’t) be determined by whether we’re male or female.

“I recently read a wonderful article entitled Fathers Who Do The Dishes Have Ambitious Daughters,” Macgregor recalls. “I have a five month old daughter, Tennessee, and its hugely important to me that she sees her parents as a team – to see her parents doing all kinds of things that aren’t limited by them being ‘the mother’ and ‘the father’. My husband, Hugh, does all the laundry and, like Milo, is hugely caring.”

Macgregor was raised in Germany, France and England, and Milo is a book that examines cultural differences, primarily through the character Tripi, who is a Syrian refugee. Tripi sees the world as borderless. We asked if her childhood, living in different countries, led her to see the world as ‘borderless’, as Tripi does?

“Absolutely!” she agrees. “I’ve always found it odd that the world is parcelled out to different groups of people, that a human being belongs in one place and is a foreigner in another. I think that these boundaries are responsible for much of the heartache in this world. When I attended a posh girls primary school in Oxford, one of my six year old classmates (who didn’t like me very much) turned round to me one day and said ‘my mother says you’re a Nazi’.  This was in the 1986! I was doubly affronted as my German family fought in the resistance. My mother speaks with a continental accent (composed of a rather odd, un-pin-downable mix of French, German, Italian and Spanish) – and so, despite living in England for over twenty years, she’s always been treated as an outsider.

“It’s a naive notion, I know, but I’d love human beings to see themselves as citizens of the world. When I was seventeen I read Michael Ondaatje’s The English Patient which, in a beautifully poetic way, explores this notion of a world without borders. It had a huge impact on how I saw the world and my place in it.”

The last line of the book drops a bombshell that some readers might say is inevitable, but I was surprised to read. I wondered what drove Macgregor to end on that note, which at best could be described as bittersweet and I ask her if it was a difficult decision to make, for a character she no doubt loved dearly, to take that final step to end the story?

“I wanted the end to be hopeful – giving hope is very important to me as a writer – but also to be realistic,” she imparts. “We know that Milo’s eye condition is going to get worse, but that doesn’t mean it’s the end. He’s the most resourceful little boy you could hope to meet: he’s only just started on his quest to make the world a better place.”

With Milo out in the world and such a huge success, what comes next from you?

“My second novel isn’t a sequel to Milo but is very much in the same style: a family story, told through several points of view, one of which is that of a little girl, Willa,” Macgregor replies. “Oh, and there’s a quirky animal in there too! The novel starts with a mother standing on the doorstep of the home she walked out on seven years ago: she wants to pick up where she left off – only, a great deal can change in seven years. After the bombshell of the mother’s return, the family fractures and then, over the course of a fraught bank holiday weekend, is painfully (and unconventionally) stitched together again.

“I’m also writing a biography of my mother’s life,” she concludes, “with her identical twin sister as they hitch-hiked through the twentieth century, from fleeing Berlin when the Russians invaded when they were four, travelling on a cargo ship from Germany to America (the land of Elvis and ice-cream, mini-skirts, Quakers and The Ku Klux Klan) to marching in the Paris Student Riots of 1968. And much more besides!”

Click here to read the book review of What Milo Saw