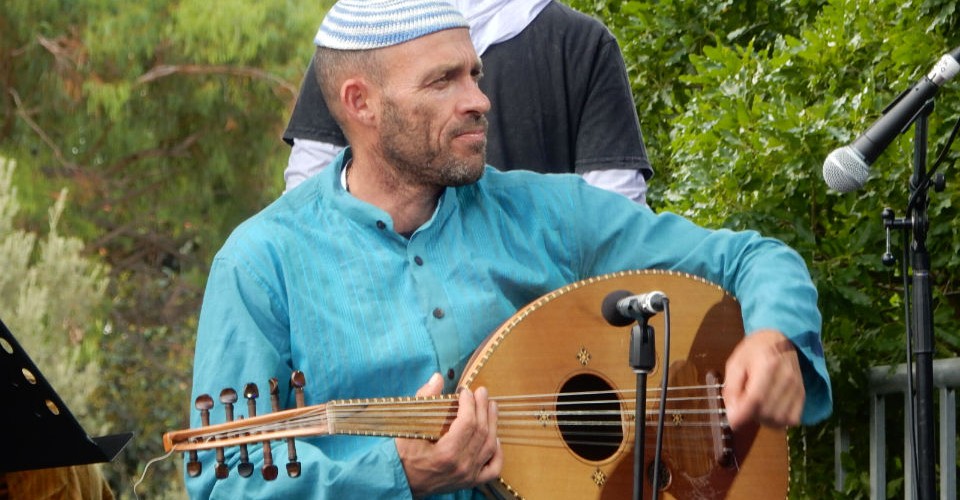 There wasn’t much music programmed for the early part of Day 4 so it seemed like a good time to go to Speakers Corner and hear what people were saying about religion and the environment. The session was chaired by an unorthodox, unruly, and occasionally funny Fr Bob Maguire. On the panel was a scientist, a rabbi, and a Muslim academic. (Could be the first line of a joke …) It was perhaps a rare occasion when all religions represented agreed – there is a dire need for more to be done to awaken interest in their respective flocks about sustainability and the environment. Prof Mohamad Abdulla said it best – religious leaders simply need to take a more active role in engaging their congregations about the environment.

What followed made it a tough day for me musically! I have written elsewhere about how the music at WOMADelaide has changed over the years (https://theclothesline.com.au/are-WOMADelaide-adelaide-fringe-losing-soul/), and I realise that there is a generation change going on among WOMADelaide audiences, and I’m part of the generation slowly being transferred out! I found plenty of stimulating and enriching music on days 1-3, but it just happened that most of what I chose to see on the final day was part of a trend towards anonymous global funk, where everyone basically sounds the same.

Wikipedia defines funk as “a music genre that originated in the mid-1960s when African American musicians created arhythmic, danceable new form of music through a mixture of soul music, jazz, and rhythm and blues(R&B). Funk de-emphasises melody and chord progressions…. and brings a strong rhythmic groove of a bass line played by an electric bassist and a drum part played by a drummer to the foreground.”

Note the part about de-emphasising melody. Global funk is my term for any world or ethnic music that has corrupted its origins with an excessive reliance on rhythm and percussion. And once that happens, they really do all sound much the same. But I acknowledge too that time after time I walk away from acts featuring this type of music while hundreds of others are drawn to it like moths to a flame. Melody is irrelevant to them it seems and they dance with joy and abandon to this anonymous global funk. So it is, I concede, MY problem.

After an initial skim of the weekend program I decided that Lamine Sonko and the African Intelligence were probably going to be just another global funk band and decided to give them a miss. However the video on the WOMADelaide website featured Sonko playing some great acoustic guitar with just one other acoustic guitarist so I decided to give them a go. Sonko’s guitar, as played on the demo clip, got about 30 seconds airtime before the 11-piece band just crawled all over it and went funk. Very misleading video.

I thought I’d try the music of another recent immigrant to Australia, Natalie Rize, from Jamaica. Various flags were draped over the speaker boxes to nice effect, and for some unknown reason the bass player appeared in jet pilot overalls and bomber helmet. Natalie herself was full of energy. She’s a compelling and elegant performer but this is a form of reggae very different from the Bob Marley days. A VERY loud bass drove the show, and there were tons of percussion and for mine, everyone was just playing too much. Reggae works best when the arrangements are sparse and there’s a recognisable melody line. No such thing in this performance. Just a wall of sound where nothing had space.

Mercedes Peon is from Spain and has spent much of her life preserving and playing the indigenous music of Galicia. For a second time I found that a promotional video for an artist on the WOMADelaide website was totally misleading. Peon’s promotional video featured her as the lead singer in a big band with a female chorus. What we got at WOMADelaide was a one woman show using various forms of electronica, looping vocals and occasional bagpipes to launch an aural assault on the audience. Any semblance of the original Galician tunes was lost in the mix.

I wandered back to Stage 2 and found The Piyut Ensemble from Israel, an all-male group of eight singers, a string player, flautist, percussionist and three clappers singing pieces inspired by ‘African and Middle Eastern traditions of Jewish liturgical poetry, (and) synagogue melodies’. It was affirming to know there were artistic types in Israel who do things other than wage war on their Palestinian neighbours. Their acapella like arrangements were pure in form and quite hypnotic in their insistence. Not particularly tuneful as some devotional music can be, but it was certainly high energy, authentic, and positive in intent.

Nhatty Man and Gara is another foreign artist who has relocated to Australia. Originally from Ethiopia, reggae is part of their sound but it’s much bigger and louder than that. ‘Ethio-jazz’ the program called it but for me it was just another incidence where all the players just get bogged down in yet another example of anonymous global funk. I did enjoy their brass section however.

I was becoming dispirited. Days 1-3 provided plenty of variety and purity of ethnic sounds. Day 4 seemed to be loaded up with bands that all sounded pretty much the same. The Specials were still to come – an old favourite from years back – but that was two hours away and I’d run out of steam. A four day festival feels too long. No one forces you to go all four days of course, but 3 days feels about right.

Interestingly, the undoubted highlight of the day was non-musical. Les Goulus are a crazy French troupe who are hilarious at pretending to be equestrian show jumpers in their giant horse puppets. A very funny interlude on the way between stages.

I’m beginning to see why Peter Goers can say how he loves WOMADelaide but can’t stand the music!

Big ticks to WOMADelaide management for ensuring people could take in plastic bottles of water. And it was very noticeable that what had become a growing, annoying, and unnecessary police presence (with sniffer dogs!) over the last couple of years was scaled back. Good move. WOMADelaide does not need heavy handed policing.

WOMADelaide is still a wonderful event. It’s still an enchanting world of fantasy for all ages, and still has a magic about it.