WOMADelaide Day Three: Like A Fair Weather Friend In The Rain – Festival Review 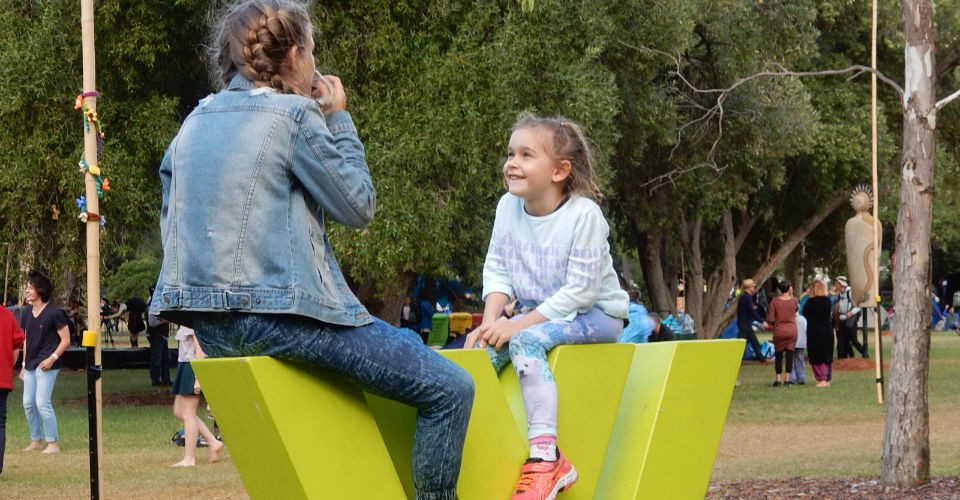 I felt like a fair weather friend as I arrived in the late afternoon after the rain had stopped. I tried not to look anyone who had weathered the days’ rain in the face as I took my place on the soggy ground out front of the Zoo Stage for Indian classical music singer, Sudha Rajunathan. She introduced her music as “a treasure of South India” and said she expected an audience who can appreciate the finer points of Indian classical tradition. Just in case we didn’t, she shared earnest information about each piece her trio played. She’s an extraordinary singer. Nothing seemed beyond her as she pitched high and low and quivered and slid between notes of the various ragas they played for us. Very pure, unadulterated ethnic music that for some would be an acquired taste. As is often the case with Indian classical music there was a lot of mimicking the vocal sounds by accompanying instruments – violin and tabla. It was a real treat.

I had heard Aziz Brahim talk about the plight of her Saharawi people on day 1 and was looking forward to hearing how she translates her ideas into song and I wasn’t disappointed. She has a musical connection with the Tuareg people of North Africa, and much of the music reminded me of the desert rock sounds of Tinariwen from several WOMADelaide’s back. The sound is cool and cruisy and Aziza’s vocals float delightfully across the top of her five-piece band. There’s a lot of space in the rhythms and at times the lead guitar parts sounded very much like white blues guitarists of the 70’s. Think Al Kooper for those who might remember.

Bebel Gilberto from Brazil was the next main attraction on the Foundation Stage. She looked bewitching and her band – including two classical guitarists – sounded smooth and classy. It felt a bit like nightclub music. It was quite jazz oriented and featured some superb percussion from the drummer, but there was something strange about a singer intent on providing endless opportunities for photographs of her sexy poses and flaunted sexuality. She is Brazilian after all, but it didn’t feel quite right at WOMADelaide.

I had intended to catch some other music before the live performance of Koyaanisqatsi by the legendary Philip Glass Ensemble but I noticed the space in front of Stage 2 was filling up fast so I found a spot where I had a good view of the screen and killed half an hour there watching the crowd gather. That was a good decision. Koyaanisqatsi packs just as much punch as it first did on release in 1982 – perhaps even more so. Stunning images of life on planet earth were projected behind the Ensemble as they faultlessly delivered the dramatic soundtrack for the next 90 minutes. I seem to remember talk of Koyaanisqatsi being something that was great to watch while under the influence of whatever drug you might choose, but these days it felt more like a serious reminder to us all that we humans live on a beautiful planet that we need to take better care of. But down the back there was the unmistakable odour of marijuana so I guess for some it’s still a case of the best way to experience Koyaanisqatsi is to be stoned! I’m sure they loved it. 35 years on it is still a remarkable sound and vision experience – stoned or otherwise.