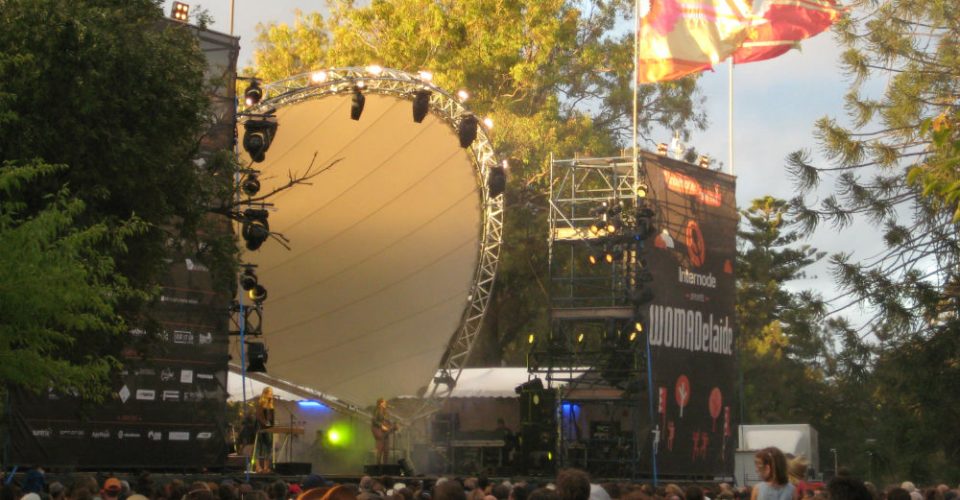 After dropping a carload at the Zoo entrance to see Smashed, I find a park and make it back in time to catch the intoxicating sounds of Depedro on the main stage. I am reminded of seeing him at The Gov with Calexico, and make a mental note to head to Mr V’s tent to purchase a copy of the CD. Then it’s time to head to the MoretonBay stage for Robert Forster. A great day already! Mr Forster is very formally dressed and begins with a couple of solo tunes before introducing Jherek Bischoff on bass, and they bring back memories of The Go-Betweens in duo mode. He then introduces the Zephyr Quartet, an inspired choice, as they add a delicious backing to Forster’s edgy pop. A Day 2 highlight!

Promising to venture further afield today I head to SC6 for a conversation between Youssou N’Dour and Peter Garrett. Unfortunately the venue is far too small for the level of interest and there are more people mingling outside than there are in the packed tent. The difficulty of hearing anything combined with the need for every exchange to be channelled through an interpreter makes for a less satisfying experience. Friends who managed to score a seat inside report later that the conversation was scintillating.

Having missed him the previous night, we make our way over to catch C.W. Stoneking, who has invited Vika and Linda Bull to join him onstage. I enjoy what he does, but my curiosity is also aroused by Icelandic singer Soley, so I make a halfway switch and head over to the MoretonBay stage. Her songs are entrancing, and it’s a pleasure to be able to sit back in the open air and take it all in.

Then in a brilliant piece of scheduling Balkan Beat Box take to the main stage at 6pm and soon have a capacity crowd jumping up and down. I’d heard their music before, but was quite unprepared for the high energy and excitement of the band in the live setting. Watching so many people having a good time is also part of the WOMADelaide buzz!

Too exhausted to watch anything energetic after that, we head back to SC7 for a bit of lo-fi daftness from Welsh songwriter Gruff Rhyss. His odd little tale about an explorer searching for a lost Welsh tribe in the infinite American interior, interspersed with some quite beautiful songs, really hits the spot.

By now we are needing food, but the food area has a population larger than Adelaide, so we find the Cibo tent for some coffee. From here we can take in the sounds of Jupiter & Okweiss International but we’re not ready to re-enter the fray just yet. We linger long enough with friends to hear the sounds of Myele Manzanza & The Eclectic enticing us to the Moreton Bay, but what is WOMADelaide without a bit of Kora, so we head to Stage 3, as many have, to listen to Toumani & Sidki Diabate. This is another of those truly beautiful WOMADelaide moments.

Back to Stage 1 for more Buena Vista Social Club, and the size of the band has increased from the previous night, but the average age has reduced. Largely a repetition from Friday night, the Cuban rhythms are again a joy to behold. A highlight comes when the stage is cleared of the large band leaving just Omara Portundo accompanied just by piano and then joined by Jesus Ramos on trombone. Another is when lute player Barbarito Torres does his ‘playing behind his back routine. The sight of 84-year-old Portundo enticing young fans at the front of the stage to dance is hilarious. Such fun!

The crowd disperses but despite weariness I decide to stay on and watch Typhoon. This is another of those little gems that WOMADelaide tosses up from time to time late in the evening when you want to wind down a bit before heading home. The east meets west collaboration is interesting and I’m glad I stayed.

Time to get some sleep so I can do it all again tomorrow!