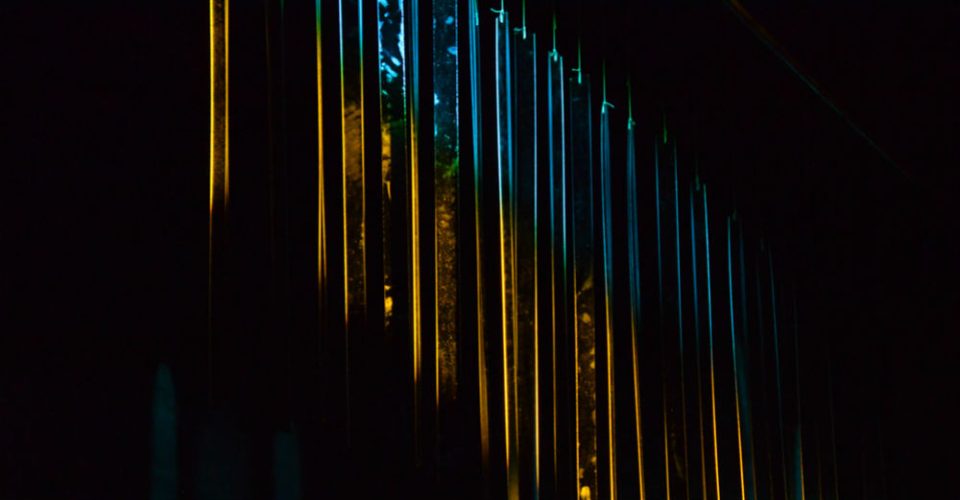 Zephyr Quartet has been challenging audiences since 1999, with recent performances including a stunning collaboration with Australian Dance Theatre at WOMADelaide 2016 and their recent production of Elvis Costello and the Brodsky Quartet’s The Juliet Letters for the Adelaide Cabaret Festival 2016.

Presented in association with Vitalstatistix, Zephyr Quartet are revisiting their acclaimed 2014 production Between Light at Port Adelaide’s Waterside Workers Hall. Designer Geoff Cobham has created a series of specially-lit performance spaces for each of the five commissioned works on the program, so the audience and the quartet will make a journey over the course of the evening to experience the music and light in various contexts, both of which integrate elements of improvisation, ensuring that no two performances will be alike.

Zephyr Quartet founder and cellist Hilary Kleinig joins us, via email, to discuss Between Light.

“We are currently in the final period of on-site rehearsals so still in the process of gauging how the change in physical space at the venue will entirely influence our, and the audience’s, experience of the performance of Between Light,” she begins. “That said I am very excited about exploring a new venue for this project – which we originally presented in the Queen’s Theatre. We always conceived this show as being a flexible, touring show – one that is suited to exploring interesting spaces, so it is great to be able to give the project a second run in a different venue.

“I think that generally we musicians and performers underutilise the idea of space as an important aspect of performance: how a space feels, smells, sounds and looks – all affects how you give and receive a performance. In Between Light we have considered the nature of each piece, firstly by sound, which was responded to by light, and then set it within the space that we see as being the most appropriate for it and the most conducive for the reception of it. It is our hope that this enhances the experience of hearing the music and seeing the piece being performed for the audience.”

How have your found the process of revisiting this material, and has anything changed in the Quartet’s approach sing the 2014 performance?

“It is always such a treat to revisit music that we have previously played because often in Zephyr we perform new repertoire and have to learn new music quite quickly,” Hilary says. “Revisiting existing repertoire allows us to explore more deeply, aspects of the music that we didn’t look at previously. We hear things differently, question what we did last time and make more informed decisions about what we are playing and why.

“Our aural awareness is more acute because we are more familiar with the music. It is also less taxing to approach performing music from a known perspective – it is a bit like revisiting a foreign country or a journey that you have previously travelled: while the minor details may change, you know the lay of the land in theory and what to expect, where things are heading, what the difficulties are and what landmarks to look out for.”

The works commissioned for Between Light leave room for improvisation. Is the spontaneous component something that might be apparent to the audience in the moment, like a solo, or are there textural, rhythmic, or harmonic components that vary from night to night?

“A bit of all of the above really,” Hilary says. “I think that on the whole a first-time listener might find it difficult to discern which aspects of the pieces are improvised or not. In each piece, the nature of the improvisational aspects varies and they cover all of the elements that you have mentioned.”

Is it challenging performing in the dark?

“For the most part we have light enough to see our music – we have to, otherwise it would be very tricky to play the music!” she says. “I think it’s the audience that can be really challenged by the changes in light within this performance, as that can be a confronting experience on many levels. As a performer, it’s interesting to see how the audience reacts to the different lighting scenarios presented in each space.”

Share with us a bit of wisdom for younger performers who might want to pursue a career in the arts.

“Keep going and keep going, work hard with good people that inspire you,” Hilary says. “Be true to yourself, be diligent, be professional and always value what makes you unique and what sets you apart.”

Book at Vitalstatistix on 8447 6211 or vitalstatistix.com.au. Click HERE to purchase your tickets.